The Minting of a New Agent, Part 1

What does it take for the director of an anti-ganking group to see wisdom of the Code? BeBopAReBop RhubarbPie decided to find out. 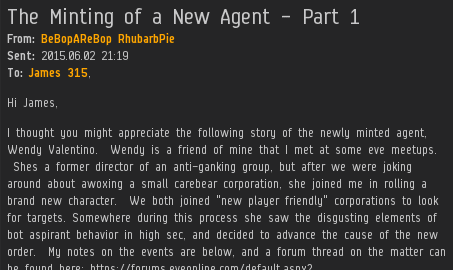 BeBopAReBop and the anti-ganking director made a pact: They would find a typical highsec industrial PvE corp and slip a newbie alt into it. Then they would test the corporation with a wardec, to see if its leaders truly cared about newbies or not. Was the New Order right about the carebears? 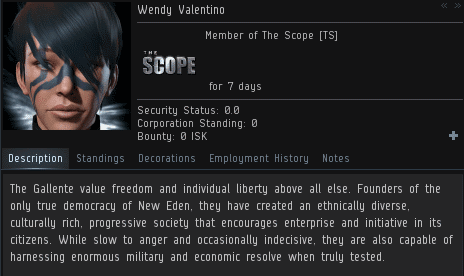 Wendy Valentino, the newbie alt of the anti-ganking director, joined Essence Distribution and Mining corporation. Though only a few weeks old, it had really taken off; it had around 30 members already. BeBopAReBop's alt, Zawaka Inazuma, wardecced the corp. He also ganked Wendy's Venture to complete the disguise. Now a deep-cover spy, Wendy was positioned to feed intel to Zawaka. Would the corp leadership prove to be gallant--or a bunch of Goofuses?

Yoshiyo Solette, the founder and CEO of the industrial corp, was killed in a fail-fit Procurer. He'd been mining during the wardec. With a war-target in local. Zawaka chatted with the CEO in local to see what was up.

To Zawaka's surprise, Yoshiyo took the loss well. He even gave "gf" in local. Splendid!

So far, so good. Yoshiyo wasn't threatening to file a petition or whining about new players. Instead, he offered to fight the wardeccer.

Zawaka couldn't resist the invitation to fight someone who could fight back. 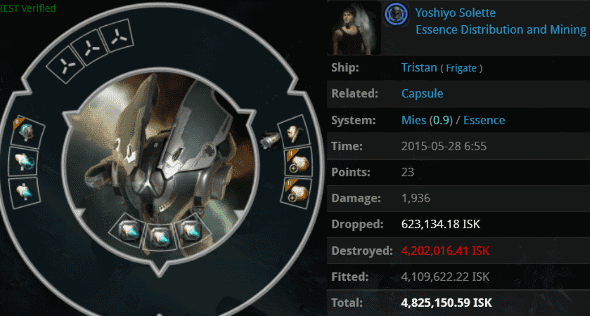 ...However, the CEO was merely flying a dubiously fit frigate.

Now Zawaka began to harbor doubts about Yoshiyo. He hunted down Yoshiyo's pod and killed him. Unfortunately, this sent Yoshiyo out of the system by way of pod-express, so they could no longer chat in local. But Wendy Valentino was still inside the corp. Watching. Waiting. 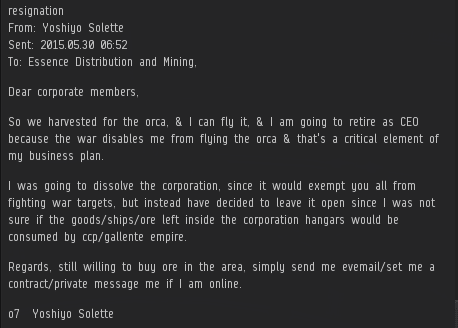 Two days later, Wendy and the rest of the corp received a shocking EVEmail from their fearless leader. Yoshiyo had decided to resign from his post as CEO and quit the corporation. Having used the corp members to mine for his Orca, Yoshiyo no longer had any interest in them. After all, the wardec prevented him from using the corp Orca. So he simply took the Orca and everything else he could get his hands on--and left his corp members to fend for themselves. Yoshiyo appointed a random newbie as CEO in his place. Enjoy the wardec, everybody!

Wendy couldn't believe it. Everything the New Order ever said about highsec carebear CEOs was true. She passed the EVEmail to Zawaka.

During their battles, Zawaka had high hopes for Yoshiyo. He'd said "gf" and seemed to be a good sport about the wardec. The former CEO, though grumpy, might still have a chance at enjoying EVE. Zawaka decided to invite Yoshiyo to join an alt's PvP corp:

Out of nowhere, Yoshiyo threw a tantrum.

It seemed Yoshiyo had more Goofus in him than anyone realized. Yoshiyo flunked the test. Wendy, meanwhile, found the whole experience to be eye-opening. And she, unlike her former CEO, wasn't willing to give up on the carebear corp just yet.