The Rise of the Space Neocons, Part 1

Trust is a distinctly human element of EVE; it only exists where there is the possibility of deceit and betrayal. That's why bot-aspirants have no use for it. The bot-aspirant wants every transaction in EVE to be purely mechanical and scripted, like buying skillbooks from an NPC. They want to remove the human element: The building of relationships, the establishment of reputations, and so on.

The heartless bot-aspirancy of the carebears was put on full display when they begged CCP to remove awoxing from the game. They don't want to do background checks and connect with their fellow players, taking their measure on a human level. As bot-aspirants, they want to follow a predictable routine: Push button, get result. No need for trust.

The New Order and its Code stand opposed to bot-aspirancy in all its forms. The antidote to this particular strain of bot-aspirancy is, in a word, scamming. It ensures that good, human players are rewarded, while bad, bot-aspirant players have their assets confiscated in the name of the Code.

Enter the "Space Neocons". They're an elite unit of New Order Agents who want to keep trust a factor in the game. The Space Neocons consist of TheInternet TweepsOnline TheInternet, a modern-day Johnny Appleseed who roams highsec, teaching PvE corps to set up an ore buyback program; Gerry Rin, not to be confused with Code martyr and September 10th permaban recipient Jerry Rin; and Kalorned, the quintessential highsec Renaissance man--bumper, ganker, videographer, Code scholar, and social media mogul.

Last month, MinerBumping readers heard the story of koiso Phoenix and her corp, PwnySquad. The corp was not governed according to the Code, and so it was completely destroyed. 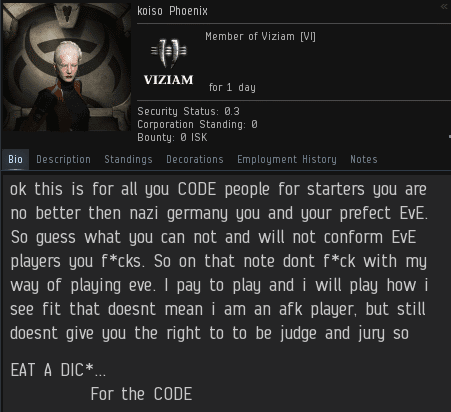 We know how the story must end. But how did it begin? How did the Space Neocons seize control, and what was the full extent of the damage? Today, for the first time, the Space Neocons have granted authorization to declassify the full, true account of this story.

We begin in the in-game Recruitment channel, where koiso and TheInternet first made contact. 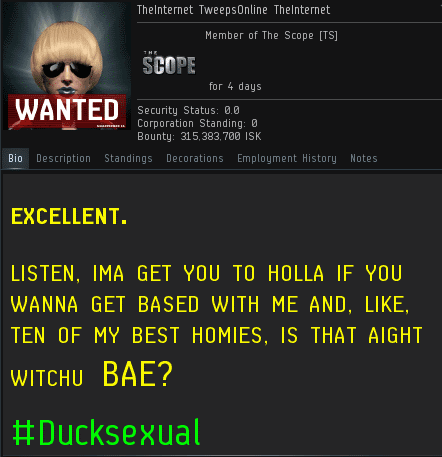 TheInternet is a famous New Order Agent. There have been plenty of MinerBumping articles about his operations. koiso, however, was not a MinerBumping reader. Why would anyone in highsec need to read the New Order's website? No important information gets posted there, surely.

I know what you're thinking, all you rebels and skeptics. "There the New Order goes again, preying upon the brave men and women who serve their country overseas. How dare they, the sociopaths!"

...Or not. koiso went on vacation without telling her old corp, leading to its demise. Now she was ready to start a new corp.

This time, koiso was prepared. She had a well-thought-out plan for the corp.

At this stage in the recruitment process, koiso performed a background check on TheInternet. This consisted of noticing that he was already in another corp. The corp in question, and TheInternet's dismantling of it, was the subject of a five-part MinerBumping series. TheInternet handwaved all that stuff in a few sentences.

koiso had a plan for the corp, and TheInternet had one of his own: An ore buyback program. Things hadn't worked out in the past, but he still believed in his dream. Always follow your dreams, kids.


TheInternet TweepsOnline TheInternet > ive got basically what I need to get started, but if you want to help fund ore buyback once it gets up and running it might help prevent any possible temporary shortfalls if we get very eager miners
koiso Phoenix > well i can start you out as a director give you an orca if you dont alrdy have one and i have a bowhead in waiting... we deffently need miners cuase im still working on mineing skills
TheInternet TweepsOnline TheInternet > alright, that sounds great

Almost exactly ten minutes after meeting TheInternet, koiso floated the idea of making him a director. TheInternet hadn't even joined the corp yet. Suddenly invested in the corp's future, TheInternet put in an application to join.

koiso continued to recruit new members to the corp. She asked her new confidant if "that dark guy" was suspicious. This kind of profiling was the full extent of PwnySquad's internal security.


koiso Phoenix > i have given you director status ill put alittle money in the corp wallet but i have to get to bed i have to be up for work in the morning :) i'll see you tomarrow i should be back on by 4pm central time

Thirty-six minutes after meeting TheInternet, koiso made him a director. Some would rob whatever corp assets existed, take over the corp, and be done with it. But this journey was far from over.

koiso had said earlier that she liked to give her corp's leaders all of the equipment and support they needed. TheInternet intended to put that promise to the test. 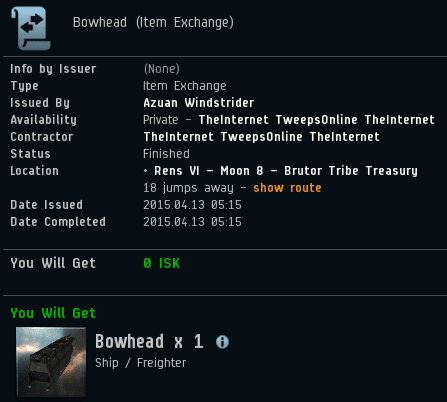 koiso's CEO alt contracted over the 1.3 billion isk ship without hesitation. In doing so, and in making TheInternet a director, koiso had shown faith. But the New Order has never been interested in a little faith, or even a moderate amount of faith. We want it all. Full faith. Nothing less.