Previously, on MinerBumping... Agent Liek Darz created his own version of the Highsec Miner Grab Bag, documenting the reactions of highsec dwellers to his various ganks and appearances in local. Miners overwhelmingly supported him in the first half of the collection. Would the positive trend hold for the remainder?

After years of New Order victories, even the most hardened rebels can be somewhat cautious in their taunts. Ventik wasn't willing to go full-rust. Hedging his bets, perhaps?

Even so, a large number of carebears will go all-in. Despite having a name that evokes the "Inferno", Dante joachim opted for the family cancer option, rather than wishing for our Agent to burn to death.

It's common for carebears to try to turn the whole permit thing around. They don't get it. The New Order already has a permit--it's called the Code. 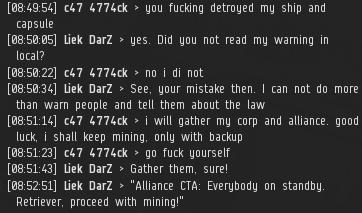 When you add someone as a contact, you can inform them of the notes you took on them. Sometimes these can be revealing. c47 4774ck accidentally admitted that he was a shitty miner.

Carebears frequently make Nazi comparisons. You'd be surprised how often the Nazis are compared favorably to us! Bumphurtedness is the most likely explanation.

Generally, though, Nazis are unpopular in highsec. A carebear or Anti-Ganker can only take things so far.

Miners have to mine. They have a compulsion for grinding isk. The New Order doesn't need to destroy mining vessels; it's our privilege to do so.

There are times when it seems the miners just don't get it, like we can't get through to them. But for every miner who curses us...

...there's another miner who shows some progress. It's richly rewarding.
Posted by MinerBumping at 18:43