The logs show nothing--but MinerBumping shows everything. Welcome to the latest edition of the Highsec Miner Grab Bag!

It's not uncommon to see carebears get vaporized for violating the Code, for reasons other than illegal mining. They look down on the miners, but all Code violators are alike. Mining, whining, what's the difference?

"Bumping? That won't do anything." That's what the miners said before their whole world changed forever.

The recent Rock, Paper, Shotgun article about the New Order generated an unusually high volume of user comments for a single article. Among the tear-shedders was a fellow named "sujet", who wrote a 900-word essay on how bad we are for the game. He says he's not an EVE player. More proof that the New Order's content creation engages people beyond the borders of our game.

Wrestling with the ethics of ganking permit holders? The debate seems like wasted effort, given that Anti-Gankers lack the skill and motivation to go through with it anyway.

Miners who get ganked can't wait to get their revenge on our Agents. Yet they are forced to wait, pretty much forever. The New Order teaches miners patience, and so much else. 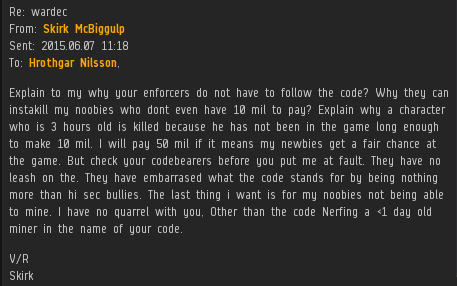 Another highsec industrialist who cares deeply for new players in his corp. How long until he abandons them or raises their taxes? 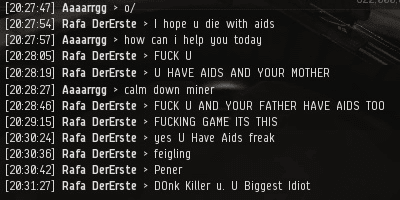 A couple decades ago, AIDS was everywhere in the news. When the media coverage died down, a lot of people forgot about AIDS. But Rafa DerErste hasn't forgotten.

...Is this supposed to be good news or bad news? 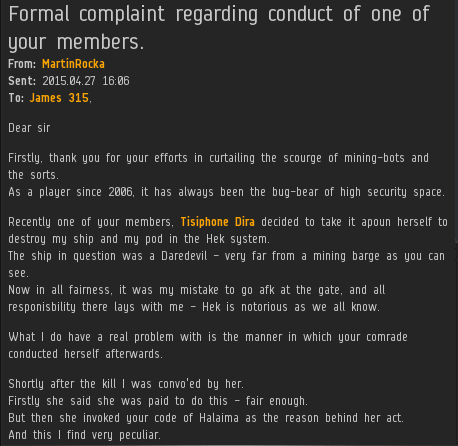 About two months ago, MartinRocka filed a formal complaint against Agent Tisiphone Dira. It's a good thing the complaint was formal, otherwise it would've taken me even longer to read it. 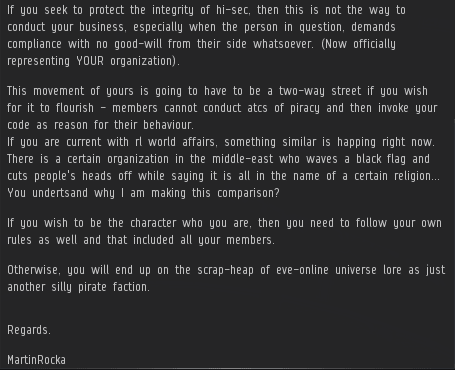 I'm still not 100% sure what the complaint is, but MartinRocka warns that if his advice isn't taken to heart, the New Order will never succeed as a movement. Carebears, have some faith. The Code is an idea; it can't be killed and it always wins. When CCP dissolves and the EVE servers go dark, the Code will live on. Can you say the same about your mining barge?
Posted by MinerBumping at 18:05