Once upon a time, gamers everywhere were fascinated by stories of titanic nullsec empires locked in ruthless, unthinkably huge wars. The stakes: Life and death, power and extinction. The jockeying for position in nullsec continues, but it takes place in the form of shifting, opaque coalitions trading renters. Conflict is no longer so romantic or painted in colors so vibrant.

If you're a writer for a major video game journalism website, where in EVE can you find something worth talking about? Easy! 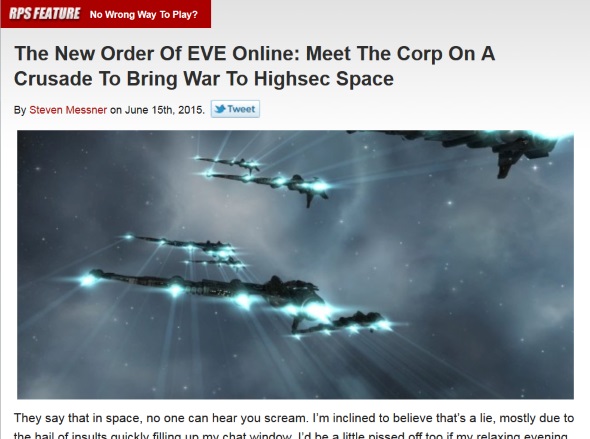 Steven Messner of Rock, Paper, Shotgun published a feature on the New Order. I would suggest you read this piece.

A little backstory. Steven has been researching the New Order for some time now. As we are a transparent, welcoming community, we gave him full access: He interviewed some prominent Agents, participated in freighter-ganking fleets, and even took it upon himself to enforce the Code and sell mining permits. Now that's journalism--embedded reporters in wartime don't normally get to fire upon the enemy! You might have seen Steven's character hanging out in the MinerBumping channel. 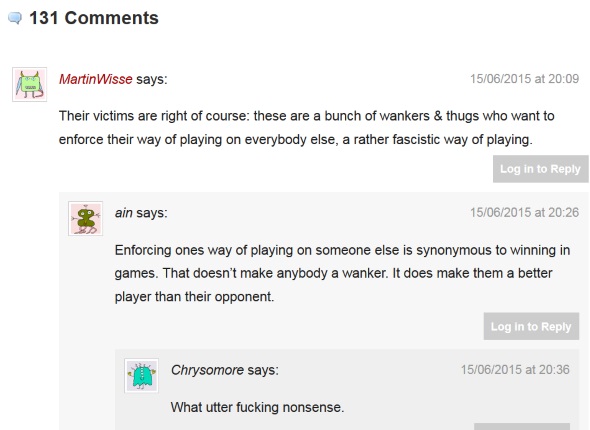 A spirited debate has already unfolded in the comments section of the article.

The carebear clichés came fast and furious, though I believe this is the first time we have ever been compared to the Thuggee.

There are still so many players who fail to grasp the concept of governing territory in highsec. They can understand claiming areas of lowsec, NPC null, or wormholes, none of which allow players to own sovereignty. But they find the idea of claiming highsec... a bit unintuitive.

The fact is the carebears are wrong to feel entitled to 100% safety in highsec. They're objectively, empirically, demonstrably incorrect about the rules of the game. The New Order has it right. Identifying the good guys and bad guys requires you to form an opinion. It's subjective. In general, though, the good guys are the ones who are right about things.

If you spend a lot of time with the New Order, you can't help but love us. Carebears were probably not happy to see video game media report on the New Order in such glowing terms. They'd prefer to pretend that we don't exist, that we don't matter, that we don't affect the game. Instead, the world of video game news has spoken: We are the most ~relevant~ group of EVE players there is.

Everyone in the New Order should take a victory lap today.
Posted by MinerBumping at 17:54