Bringing order to the chaos of highsec is no easy task. And it's not enough to have skilled, courageous Agents performing elite PvP. To create a civilized society in highsec, we need to develop the theories upon which our Agents carry out their actions. 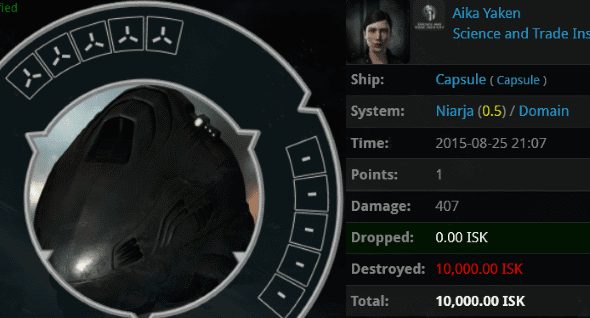 For example, we have "Empty Pod Theory". A worthless, unarmed, implant-less pod autopilots on its own through highsec. Does this constitute a threat? Common sense might suggest that it's completely harmless. But that's why we have theories. Even an empty pod, such as this one piloted by Aika Yaken, contributes to an overall culture and environment of bot-aspirancy. It's a deadly threat to the society we're trying to build. The slightest violation of the Code is grounds for the death penalty.

We know from experience that a bot-aspirant carebear who believes in 100% safety in highsec will object to the loss of a vessel worth 0 isk. 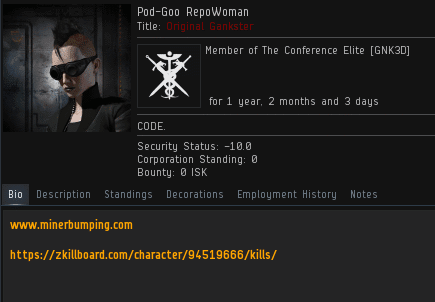 Agent Pod-Goo RepoWoman surprised the carebear when she ganked her empty pod. Should Aika really have been surprised? Rather than letting it go, or congratulating our Agent on a good fight, or thanking her for the free ride on the "pod express", Aika raged.

Aika's tears served as yet another proof of the validity of Empty Pod Theory.

Sure enough, Aika was a rebel. She spread the most scandalous lies about the Saviour of Highsec.

You know what's even more dangerous than an admitted carebear? A carebear who doesn't know he's one. Aika Yaken did not acknowledge her bot-aspirancy. She insisted that she was a PvP'er. On another character, naturally. It's the carebear equivalent of "Our princess is in another castle."

The carebear always cloaks himself in lies. Aika claimed that she wasn't autopiloting. However, as our Agent pointed out, this would have made the gank impossible. Pods go to warp instantly, so if an alert pilot is traveling in a pod through highsec--where there are no bubbles--how can they die to a Thrasher?

The self-professed PvP'er was also stunned when our Agent told her that she deliberately performed suicide ganks. Aika couldn't believe it.

As expected, Aika's "main" was too preoccupied with making money to do anything else, no matter how angry she was. PvP'er indeed. Pod-Goo RepoWoman learned so much from this gank. She also had the opportunity to help another player learn from it. Score another victory for Empty Pod Theory.

Despite Aika's bot-aspirancy and bad attitude, every highsec dweller's opinion is important. Pod-Goo RepoWoman asked Agent Aaaarrgg to send Aika a standard survey to fill out for our records.

New Order science continues to explore and document the carebear mind in search of improved methods of governing highsec.
Posted by MinerBumping at 18:33