Previously, on MinerBumping... JTClone Ares planned his ultimate revenge against the New Order. loyalanon agreed to disband CODEdot for 20 billion isk, provided that a safe way of transferring the money was found. JTClone's "brother", No Honor Bounds, popped up and poured endless praise on JTClone and his honesty.

No Honor Bounds invoked his brother's classic maxim, "Risk versus reward." I've written a lot on that subject myself, though I confess I haven't given JTClone his due credit for inventing the concept. Not long after JTClone became a rebel leader, he recorded a speech and an interview about his resistance to the Code. JTClone's secret brother revealed that he had been there all along, eavesdropping from the hallway outside JTClone's room. No Honor Bounds was being edited into JTClone's history, Forrest Gump style.

loyalanon remained AFK. Luckily, No Honor Bounds was a good enough conversationalist to carry on the discussion solo. Well, not as good as JTClone Ares, but you know what I mean. 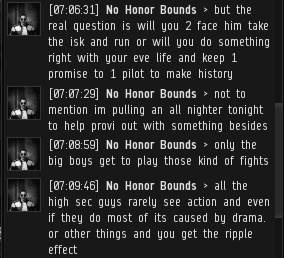 Then the world's greatest brother returned to the crux of the matter: Keeping his agreement with JTClone was the best way for loyalanon to make history. 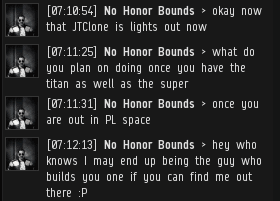 JTClone went to sleep, but No Honor Bounds continued to type into the chat window. What more evidence do you need that they're not the same person? 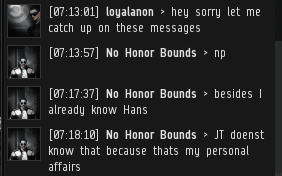 At last, loyalanon came back to his keyboard, only to find nearly half an hour's worth of garbage to sift through. He scrolled back up to screencap everything and promptly closed the chat window. 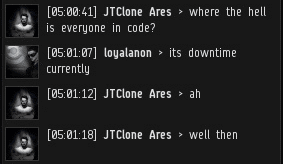 The next day, the official, verified version of JTClone Ares invited loyalanon to a convo. 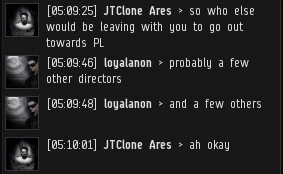 Once again, JTClone confirmed that loyalanon was really going to join Pandemic Legion. From the sound of things, elite forces from CODEdot and PL were basically going to merge. Birds of a feather and all of that.

Next, JTClone explained that he intended to... explained... uh...

Let's try that one again. JTClone's plan was... One moment, please.

Nope, even that didn't work. Moving right along. 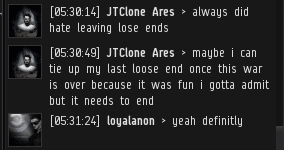 As far as I can tell, JTClone was talking about defeating the New Order, which would tie up all his loose ends in EVE. Then he would quit the game and "do some stuff" IRL, like maybe win the Superbowl. But if you think about it, if JTClone's plan were to be foiled, he would need to keep playing EVE. Scamming JTClone is good for player retention. 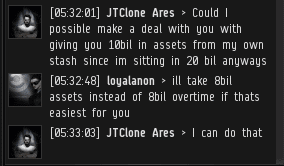 The state of JTClone's in-game wallet improved substantially from the previous day. He still didn't have all 20 billion in cash, but he could close the gap by giving up all of his ships and equipment. JTClone's alliance would need to take a lower priority as he put his focus on this all-important mission. 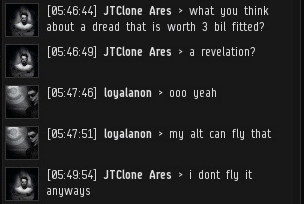 It probably doesn't come as much of a shock that JTClone never got a lot of use out of his dreadnought. 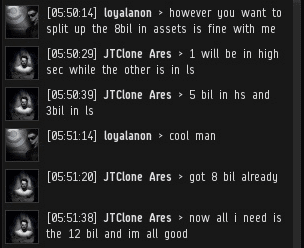 Things were coming together nicely. JTClone Ares now had an excellent shot at making EVE history.