The Old Lady of Highsec

I get a lot of random EVEmails from people all across highsec. Whenever I see a message like this plea from Madaris Tegerrin, I become curious about the events that led to its being written. Every EVEmail has a story. This is one of them.

It began harmlessly enough. Agent ST0NER SMURF ganked an empty pod belonging to a carebear. He then sent her a standard-issue New Order information packet containing some background about highsec history, along with a survey. 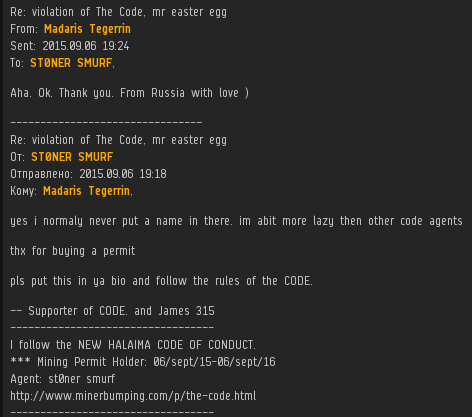 Madaris was impressed enough to respond with a payment of 10 million isk. She also added a mining permit to her bio. So far, so good. 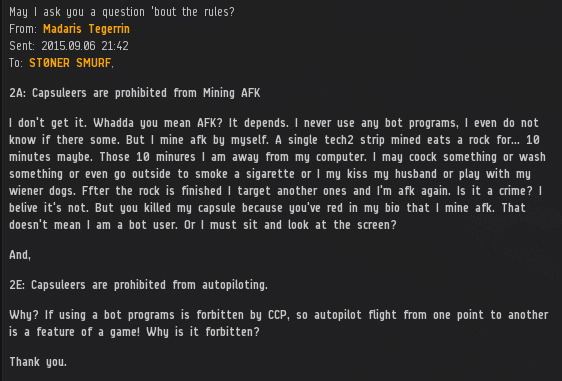 ...But then things went awry. Instead of accepting the Code without reservations, the miner began to think for herself. Unfortunately, this often leads to Code violations. Agent ST0NER warned her against this.

Madaris had some serious concerns regarding the provisions in the Code about AFK mining. It seems she'd developed a taste for AFK mining over the previous several months. A Gallant miner would have changed her behavior. Madaris, on the other hand, wrote an essay.

Like so many other AFK miners, Madaris felt it was her right to engage in automated gameplay. She wanted to be exempt from the Code because she walks with a limp. You might ask how that prevents her from docking up before going AFK--or indeed, how it affects her gameplay in any way. Carebear excuses rarely make sense. And they never take priority over the Code. 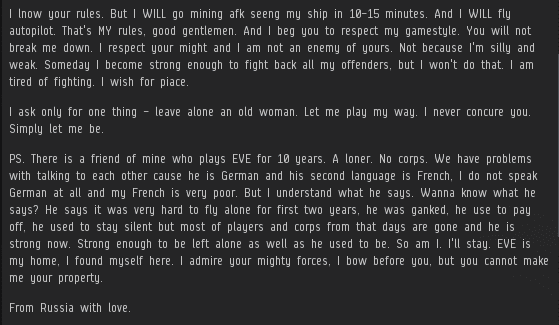 Madaris declared her intention to violate the Code on a regular basis. She wanted to play by her own rules, because she is "an old woman". However, the Code does not allow for such biases. It embraces diversity: Everyone gets to obey. 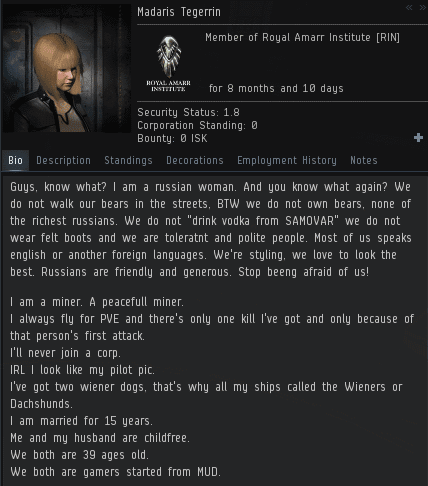 Agent ST0NER answered Madaris' questions. She had asked how Agents determine if a miner is AFK; he told her that miners must respond in local if requested by an Agent. To put it mildly, Madaris didn't like that answer. She immediately removed the mining permit from her bio and wrote another essay.

Madaris simply couldn't accept the idea that miners must take their place at the bottom of the highsec hierarchy. Nor would she recognize the exalted position of our Agents.

Let a miner speak for long enough, and he'll almost always admit his guilt. Madaris expressed illegal opinions about highsec's Saviour, but there was more: She admitted that she "started to play EVE because of its AFK possibilities"! CCP marketing team, take note.

Interestingly, she also revealed (if you didn't catch it in her bio earlier) that she was 39 years old, which qualifies as "an old woman" by her standards. Were you imagining an elderly grandmother with her cane, dear reader? Never trust a carebear.

Madaris gave up her mining permit. Without a valid New Order license in her possession, the carebear was left with nothing. Nothing, that is, except her appreciation of the wondrous beauty of EVE. Nevertheless, it is the Agents of the New Order who make EVE beautiful. Carebear, don't spoil it with your non-compliance.
Posted by MinerBumping at 17:59