On occasion, critics of the New Order express a longing for the days when our activities were restricted solely to bumping the carebears and not killing them. This is actually a myth, since the New Order has been killing non-compliants since its earliest days. Still, according to the rebels' faux nostalgia, things were better when we engaged players in conversation before shooting them. 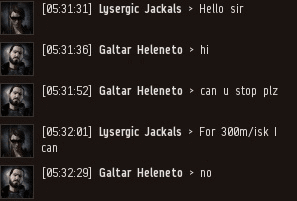 What the rebels fail to appreciate is that our gankers spend more time in pre-gank chats now than ever before. Our bumpers keep freighters bouncing around while the gank fleets assemble. They're given plenty of warning. 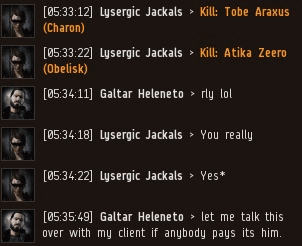 Freighter pilot Galtar Heleneto was shown the lossmails of his fellow carebears. Still, he wouldn't pay up. Then, suddenly, he wanted time to speak with his "client". 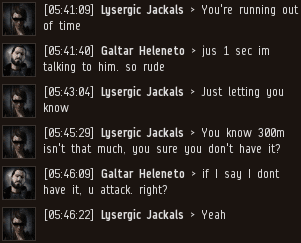 After several minutes, the freighter pilot continued to stall. Many carebears try this tactic. But ultimately, it is the 15-minute global criminal timer that rules the day. And it cannot be delayed. 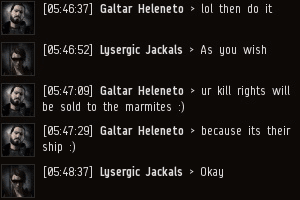 As the gank fleet prepared to undock, Galtar revealed the identity of his "client". He was working for The Marmite Collective! It was a rare case of a carebear name-dropping powerful friends in highsec. Perhaps it's a sign of the times. 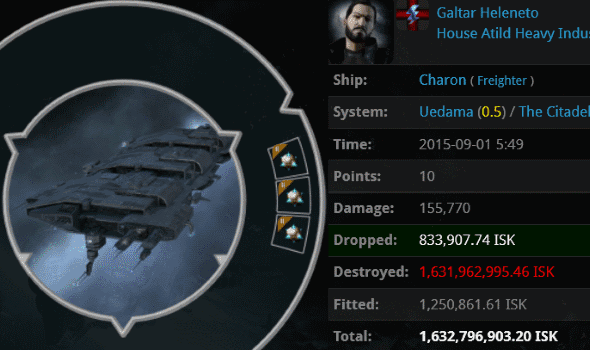 Some things never go out of style. The CODE always wins. A star-studded cast of New Order gankers put an end to the dilatory carebear's Hamlet routine.