A Snowball's Chance in Highsec, Part 3

Previously, on MinerBumping... Agent Harlequin Croft scored her first PvP victory, defeating Captain Flin-Flin's faction Vexor by hitting it with a bunch of snowballs. The carebear was stunned into silence. While Flin-Flin was still in a stupor, Harlequin podded him. 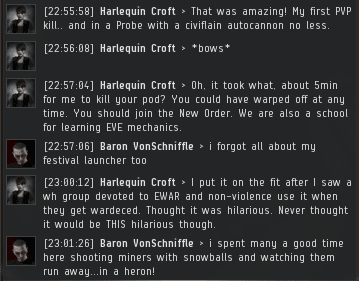 Harlequin celebrated her victory in local. Everyone was having great fun, with the possible exception of Flin-Flin. Carebears don't know how to have a good time.

Suddenly, our Agent received an EVEmail from the fallen foe. Flin-Flin still hadn't figured out what had gone wrong, and was dying of curiosity. He offered a bunch of money for answers about game mechanics. He didn't know that our Agents educate highsec all the time for free.

Click for full-size
When Harlequin explained about the snowballs, Flin-Flin was disgusted. EVE wasn't the game for him. He threatened to quit, again.

Moments later, he sent Harlequin some money. It wasn't everything he owned, but it was enough for a mining permit. Had the Goofus gone Gallant?

The miner was hopelessly confused. He sent 10 million isk, but didn't want a permit. He sent the money because he lied, but wanted to keep his word. Or something. 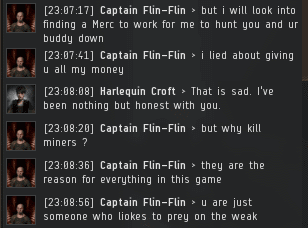 Although it was difficult to untangle what the carebear was trying to say, one thing was clear: Flin-Flin had gotten the wrong idea about miners. 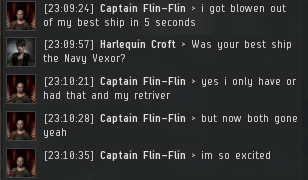 Flin-Flin refused to join the New Order because it "preys on the weak". He considered himself weak now. Interestingly, he hadn't shown any qualms about preying on the weak when he attacked Harlequin's virtually unarmed frigate. 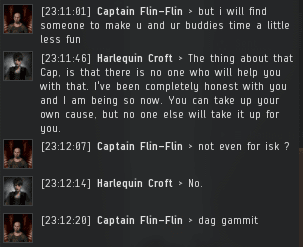 In spite of everything, Harlequin was generous to the miner. She saved him the trouble of being scammed by mercenaries. 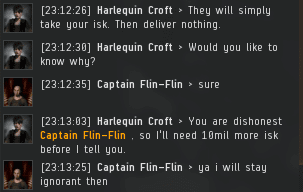 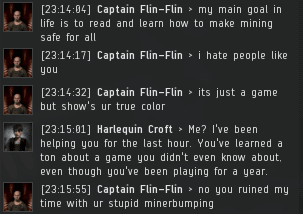 Now the miner had, at long last, a goal for his EVE career. Either that or he was going to quit, or maybe just keep mining. Whatever. 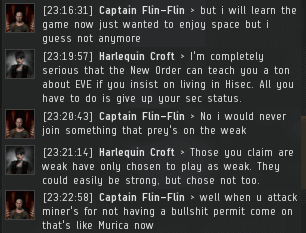 Harlequin extended an invitation to join the New Order once more. Flin-Flin's instincts, which hadn't exactly served him well in the past, still told him to stay away. 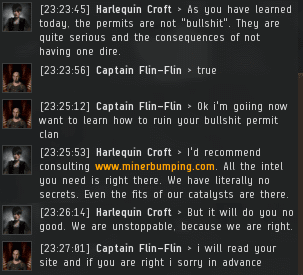 Perhaps there was hope for the miner yet. He agreed to read this blog. It's hard for a carebear to read MinerBumping and remain ignorant, even if they want to.

A few minutes later, Flin-Flin sent an additional 5 million isk to Harlequin. Does he have a chance to succeed in EVE, at some point in the future? At least a snowball's chance, I'd say.
Posted by MinerBumping at 17:50