If you've ever wanted to know more about the backstory of EVE, don't bother reading those EVE novels. Don't read the lore posts or the explanations given by mission NPCs. Instead, ask an Agent of the New Order!

In the content vacuum of today's EVE, the New Order writes the stories.

Bellatrix did her duty well. Not only did she demand 10 million isk from the miner, she told him why she was demanding it.

ip freely struggled to understand. Obviously, she wasn't a good player--it was difficult to get her excited about buying a permit.

To Bellatrix's surprise, the miner didn't want to obey the Code, even after being informed of why it was such a good idea. Something strange was going on here...

If this blog had sound effects, dramatic music would be inserted here. The miner revealed that she wasn't a new player at all. She was the alt of someone dangerous!

The highsec miner's true form was unveiled. It was a shocking revelation--ip freely Tazinas was actually a leader of the Goonswarm Federation alliance! 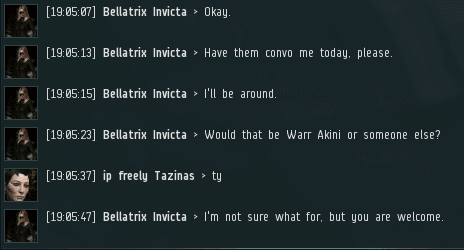 As every good conspiracy theorist knows, the New Order and the Goons/TEST/PL/etc. are one and the same. As further evidence of this, Agent Bellatrix wasn't intimidated by Goonswarm in the slightest. She probably has tea with The Mittani between ganks! ip freely quickly terminated the convo.

A few minutes later, another hair-raising twist came by EVEmail. "GoonSwarm leader" wasn't even ip freely's final form. Now she had power over CCP itself.

...It was ip freely's most hideous form yet. The monster could barely get a sentence out.

The twisted creature had clearly sold her soul for power. She was as corrupted on the outside as she was on the inside. Bellatrix could hardly stand to look upon her. 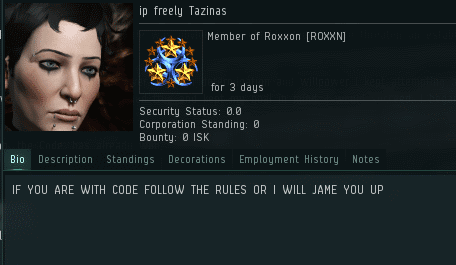 The horrors of ip freely Tazinas were reflected in her bio. And it only got worse. 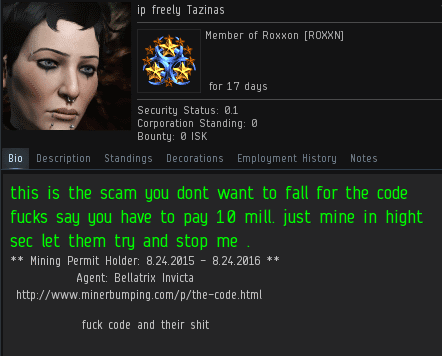 People say highsec is all sunshine and rainbows now that the New Order is in charge. It's true that sunshine and rainbows are far more abundant now than ever before, but abominations still lurk in highsec. Always be on your guard. If you encounter something that doesn't feel right, contact your local Agent immediately.
Posted by MinerBumping at 17:49