JTClone Ares is one of the New Order's most notorious foes. His very name sends a shudder of horror across highsec. 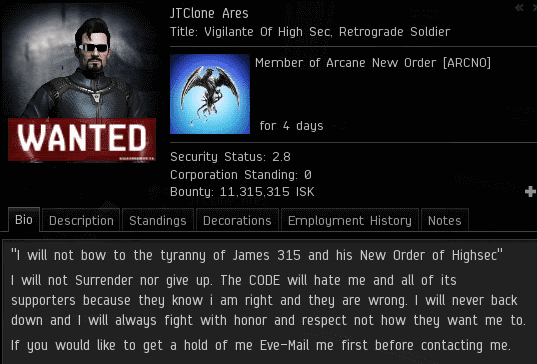 His infamy began last summer when his corp, Damned Defeat, was awoxed by Agents of the New Order. After he became aware of the infiltration, he went AFK to re-watch a Godzilla film in a movie theater. He told his miners to keep mining and generating revenue for the corp despite the active awox attacks. When our awoxers took over his corp and kicked out the members, JTClone declared himself anti-Code and began recording speeches and interviews to that effect.

Failing to rally the Anti-Ganking "community" into an effective fighting force, he continued to foment discontent in highsec. Last December, JTClone made his most brazen attack yet: He conspired to infiltrate and disband the CODE. alliance itself. However, his contacts in CODEdot turned out to be undercover New Order Agents. In an intricate ruse, they managed to trick JTClone into allowing them to disband his alliance instead.

This past spring, JTClone continued to plot against us. He pinned his hopes on rumors that CCP would ban the New Order. Apparently he'd heard that CCP's study about the effect of ganking on new player retention would vindicate the Anti-Gankers. (Actually, CCP Rise concluded that ganking improves player retention.) 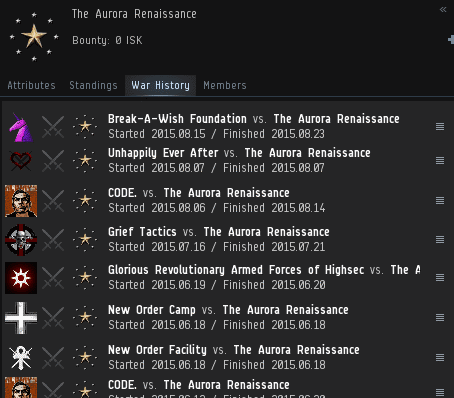 Having lost his previous corps and alliances to awoxers, JTClone started The Aurora Renaissance alliance. Long story short, it was continually wardecced. In this cropped screenshot, you can see a sample of just a handful of them.

But did JTClone Ares still intend to bring about the end of the New Order? As the awox attacks against JTClone demonstrated, our Agents are proactive. We don't sit back and wait for a threat to materialize. And so it was decided that one of our Agents should go undercover and establish a rapport with JTClone. That way, we could learn more about his intentions and foil any anti-Code plots he was brewing. Ideally, the operative would need to be subtle, diplomatic, and not too easily identified as having an agenda. One of our Agents quickly volunteered for the job. 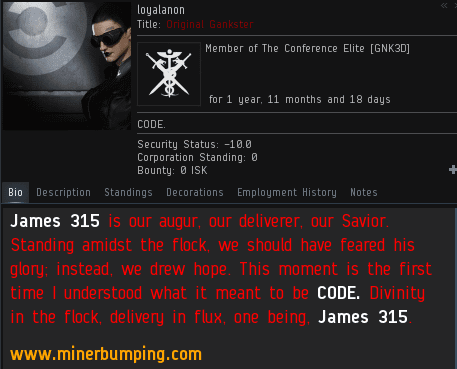 The volunteer was Agent loyalanon: the New Order's most celebrated fleet commander, EVE's finest PvP'er, the CEO of The Conference Elite, and the executor of the CODEdot alliance. The perfect spy.


JTClone Ares > good and please tell me you are talking to me about something completely different the rest of what you guys keep trying to do
JTClone Ares > also how are you doing
loyalanon > i was jus seeing how you are doing
JTClone Ares > okay so the purpose of this convo really is just to see how im doing?

It's not for no reason that JTClone is among the Anti-Gankers' leading lights. He was immediately suspicious of loyalanon's motives.


loyalanon > im good
loyalanon > so you made the move out to nullsec yet?
JTClone Ares > nope people keep stopping me but i got my plans for myself and alliance as well as other things
loyalanon > thats nice
loyalanon > as long as you always have a plan

After some niceties were exchanged, the door was open for loyalanon to begin acquiring information from the rebel leader.

JTClone suggested that he was willing to put his old vendettas aside and move to nullsec. It's what our Agent wanted to hear, but was it true? loyalanon needed to put it to the test.

So far, so good. Without JTClone at the helm, the resistance would be even less effective at stopping the spread of the Code.


loyalanon > i have a question for you
JTClone Ares > besides i already know this will be up on your blog so ask away
loyalanon > how much do you think someone would pay me to disband code alliance?

Just as JTClone finished saying that he wanted to leave the past in the past, loyalanon posed an intriguing question.


JTClone Ares > it would depend if that pilot is out for isk, power, influence, or fame
loyalanon > just because its code
loyalanon > im the executor now
JTClone Ares > If i chose to put a corp in there I would disband it in a heart beat and walk away from the computer for short time being. while they rage and teared for days
JTClone Ares > but that aint my place any more

The very idea of CODEdot disbanding seemed to awaken something inside the old rebel.

Then a bombshell was dropped. loyalanon revealed that he was planning to leave CODEdot to join Pandemic Legion, and that he would disband the alliance for 20 billion isk. Had CODEdot's executor gone rogue? Was this the end of the New Order? Or was it all part of an elaborate sting operation that would ultimately make JTClone Ares look even more ridiculous than ever?

To be continued...
Posted by MinerBumping at 19:39