Previously, on MinerBumping... Anti-Code fanatic JTClone Ares tossed aside all pretenses of being neutral, and he eagerly sought to bribe Agent loyalanon to disband CODEdot. When loyalanon proposed that his own Pandemic Legion contact serve as escrow agent for the bribe payment, JTClone logged off, only to be replaced by No Honor Bounds--claiming to be JTClone's older brother! 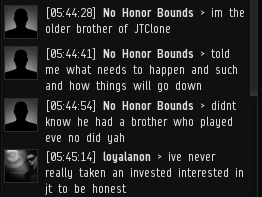 One of the first rules of the internet is that when someone suddenly appears and claims to be someone else's relative, they're not. (There has been at least one highly memorable exception to the rule, however.) 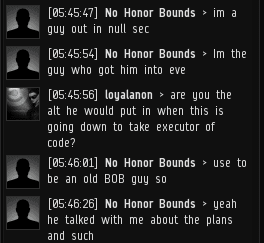 JTClone's "brother" was everything JTClone aspired to be: A guy out in nullsec. Not only that, he was an older player, a member of the notorious Band of Brothers alliance. I must say, I've never been a big fan of BoB. Regardless, JTClone's brother was clearly a heavyweight. An elite nullsec PvP'er from way back! 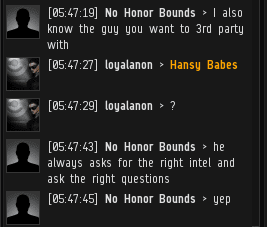 JTClone's big bro knew everybody. He even personally knew loyalanon's contact in PL, and proved it by offering really specific details about him. 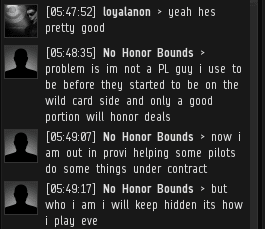 Of course, the newly minted No Honor Bounds wasn't his main character. His highly impressive alt's identity would need to be kept a secret for now. (Side observation: For some reason, highsec carebears all think Provi is where the elite PvP'ers live.) 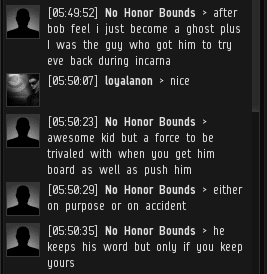 JTClone's brother shifted gears and began talking about himself--er, I mean JTClone. It was obvious that he thought highly of his little brother. 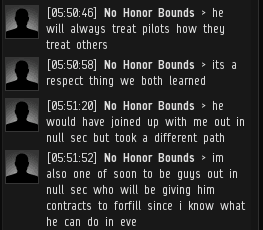 Originally, JTClone was going to join his distinguished older sibling in nullsec. But JTClone blazed his own trail, choosing instead to repeatedly lose control of highsec carebear corps to New Order awoxers. Ah, what might have been! 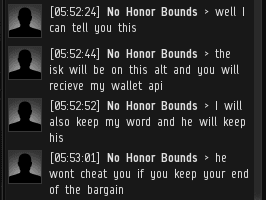 JTClone's brother took a quick break from praising JTClone to announce his intentions. He would act as the third-party escrow agent. No Honor Bounds reassured loyalanon that this arrangement would be fair, since JTClone was trustworthy. 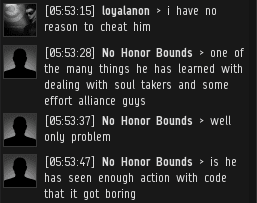 For some reason, No Honor Bounds could not stop talking up JTClone. You'd think he was related to the Saviour of Highsec or something. It's kind of ridiculous. I mean, his brother doesn't even own a mining permit! 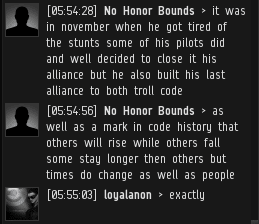 Next, JTClone's brother did a quick rewrite of JTClone's history. He hadn't really been scammed out of his previous alliances; he'd gotten bored of them, or only created them to troll the New Order. Or to make a point. 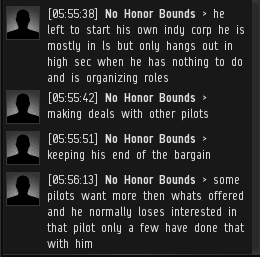 JTClone Ares can be your best friend or your worst enemy. What a fascinating, dynamic individual he is. 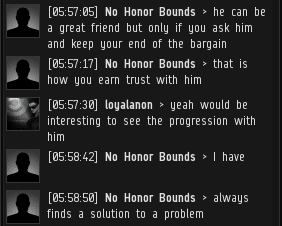 The accomplished Guy Out in Nullsec was mightily impressed by JTClone. Couldn't say enough about him. 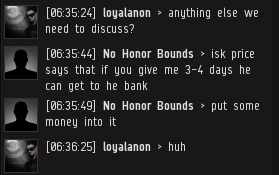 After loyalanon returned from being AFK for a bit, No Honor Bounds got down to business. Unfortunately, JTClone's confusing way of expressing himself apparently runs in the family. 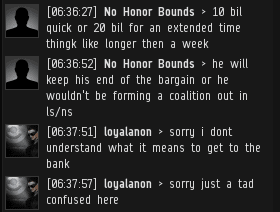 No Honor Bounds accidentally let slip his brother's plan to create a whole new coalition in lowsec and nullsec. (Nobody tell the Imperium!) But loyalanon was more focused on how he was going to get JTClone's money.