Previously, on MinerBumping... An exhaustive investigation by Agent TheInternet TweepsOnline TheInternet revealed rebel leader JTClone Ares to be an unrepentant enemy of the Code. Agent loyalanon contacted JTClone, offering to disband CODEdot in exchange for 20 billion isk. If he were a Gallant, he would've rejected the offer out of hand. Instead, JTClone savored the idea of revenge. Still, he'd been burned by an almost identical scheme several months earlier, so he remained cautious. 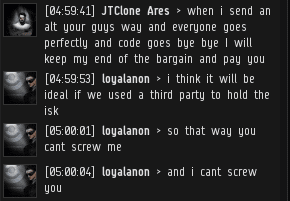 JTClone wanted to pay nothing until after the plan had gone through. loyalanon suggested a slight alteration to the deal. 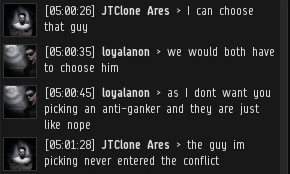 Though he preferred not to pay anything up front, JTClone felt reasonably comfortable sending the money to be held in escrow by a third party. As long as he chose the escrow agent, that is. 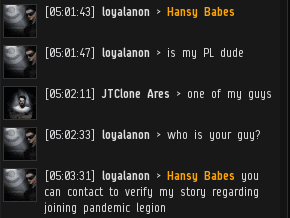 loyalanon identified his own preference for escrow agent: Hansy Babes, a member of Pandemic Legion. Incredibly, Hansy actually was a member of PL, as opposed to an alt claiming to represent PL, as is more frequently the case. 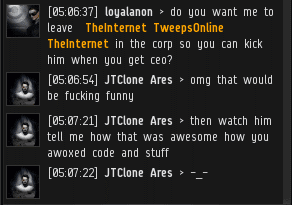 For the moment, JTClone remained mum about his own pick for escrow agent. As he thought it over, loyalanon entertained JTClone by encouraging him to imagine what victory against CODEdot would be like.

Before he got too wrapped up in fantasies of defeating the New Order, JTClone wanted to make sure every aspect of the plan was nailed down. Every "i" was to be dotted and every "t" crossed. He wasn't going to be made a fool of this time.

loyalanon was completely familiar with the corp management mechanics. He assured JTClone that the plan would go smoothly. 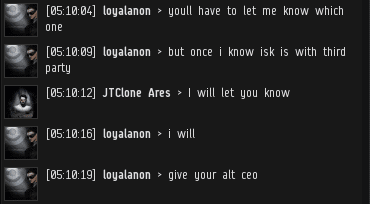 The plan drew nearer to fruition. Still, there were some unresolved questions: Who would act as the third party to hold the funds? And where would JTClone find 20 billion isk? 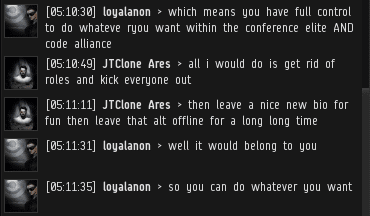 Such questions were put aside for now. After more than a year of constant defeats, JTClone was intoxicated by the idea of victory. 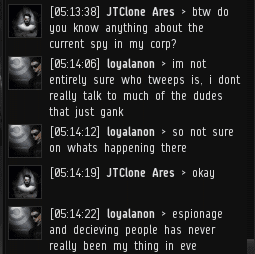 At around the same time JTClone was telling his alliance that he'd found the spy, he asked loyalanon if he knew anything about the spy. loyalanon was too aboveboard to get involved in any such skulduggery. JTClone then ended the convo, promising to give more thought to his choice of escrow agent. 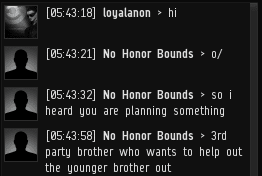 Before long, loyalanon received a convo request from out of the blue. It was No Honor Bounds, a character who had been created just minutes earlier. He was so new that his portrait wasn't even showing up yet. 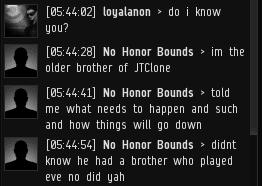