The New Order doesn't believe in the word "never". At least, not when carebears use it. For instance, "I'll never pay you. I'll never buy a permit. I'll never obey the Code."

Tase Ahashion was one of the more passionate opponents of the Code. A freighter pilot who lacked a permit, Tase suffered the obvious consequences and threatened to petition CCP. He continued to campaign against the Code, insisting that ganking is not allowed under the EULA. Finally, after his corporation dissolved due to New Order wardecs, he felt he had no choice but to buy a permit.

But the New Order sees and hears everything. It didn't take long for Agent loyalanon to learn of Tase's ulterior motives for buying a permit. Under interrogation (but not torture), Tase confessed that he didn't really believe in the Code at all!

Then came the twist: As bad an EVE player as Tase was, as much of a bot-aspirant he was, and as much time as he wasted with frivolous petitions, it was not loyalanon's wish that Tase Ahashion leave the game.

Despite the fact that Tase represented everything wrong with highsec carebears, loyalanon didn't want to run him out of the game. loyalanon wanted to help him.

The New Order's generosity and benevolence is unmatched in EVE. No other organization spends so much of its time helping and reaching out to its avowed enemies. 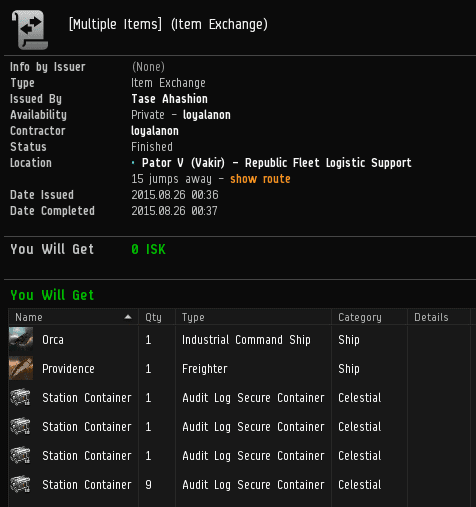 loyalanon offered to share the secrets of a positive EVE experience with Tase. Though initially skeptical of the idea, Tase agreed to be taken under loyalanon's wing. But first, the bot-aspirant needed to cut ties with his old life. Taking a vow of poverty, Tase contracted his assets, including his cherished freighter and Orca, directly to loyalanon. 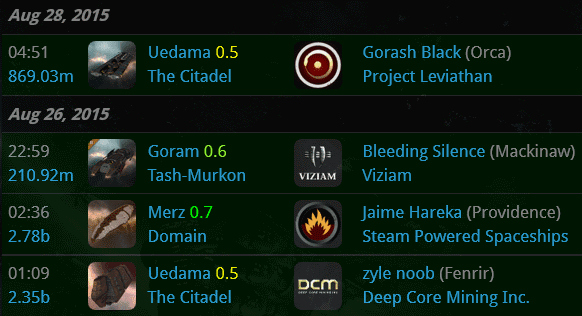 Next, Tase was trained in the art of the gank. He even joined some freighter ganking fleets. From freighter pilot to freighter-ganker; it was a wondrous transformation. 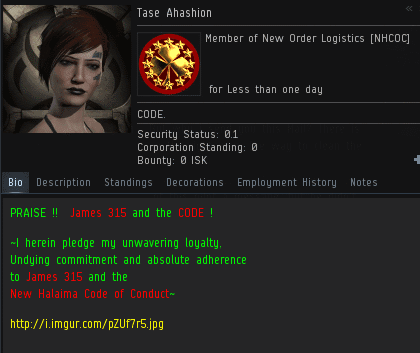 The carebear who had petitioned CCP so many times was now a member of CODEdot, the very alliance he'd insisted was violating the EULA.

Tase briefly popped up on the MinerBumping forum, expressing enthusiasm for his new EVE career and the Saviour who made it all possible. It was the golden age of Tase Ahashion.


Tase Ahashion > Boney kicked me so I thought I was not wanted there
loyalanon > just because you fucked up doesnt mean we dont want you
Tase Ahashion > Not to worry, I will give you all that isk you gave me and leave the game. It is my fault and Boney was right to kick me
loyalanon > hows this
loyalanon > you come gank miners with me tomorrow
loyalanon > ill teach you how to gank

Alas, it was a false dawn for Tase. During one of the freighter ganks, he shot the freighter wreck, potentially costing the fleet its precious loot. Tase was kicked from the fleet.

Now Tase no longer believed he had a chance in CODEdot. He had ruined it, just like he'd ruined everything else in his EVE career.


loyalanon > it takes time to learn
loyalanon > someone will help you
loyalanon > i didnt get to where i am from giving up when i made mistakes
loyalanon > every mistake ive ever made
loyalanon > i learnt from it
Tase Ahashion > No they wont, that much has been made obvious already, they resent me for some reason.

loyalanon urged the reformed carebear not to quit. When loyalanon said every EVE player counted, he'd meant it. Others may have dismissed Tase, but loyalanon truly wanted to see him succeed.


loyalanon > stick it out for a week
loyalanon > it gets better
Tase Ahashion > It really is ok, please dont worry about it. I am just going to leave the game and be done with eve
loyalanon > thats your choice
loyalanon > let me know if you decide to stay.
Tase Ahashion > Thank you for everything, it was fun while it lasted. Besides I am now flat broke. Cant even buy a shuittle, LOL. I wish you all the best and please continue enjoying eve.
Tase Ahashion > I will not be staying. Good bye my friend.
loyalanon > o/

New Order Agents rallied behind Tase, but he was not cut out to be an elite PvP'er. At least, not yet. Tase took a break from EVE but eventually returned. He deleted his bio and joined up with PvE'ers, sliding back into his old carebear habits. The truth is, there is no going back. Tase's dream of bot-aspirant gameplay died when the Code was written--even if he didn't know it yet. One day, Tase will return to the New Order family. If he is to have a future in EVE, there is no other choice.
Posted by MinerBumping at 17:55