JTClone Ares embarked on a wicked scheme to bribe loyalanon 20 billion isk to disband CODEdot. JTClone's biggest supporter and confidant was No Honor Bounds, JTClone's brother/self, who endlessly lectured loyalanon about how great JTClone was. Throughout the negotiations, JTClone promised himself that he wouldn't be scammed again. This time, his payments would be sent to a trusted third party, preferably his own alt. As the plot reached its climax, JTClone went all-in, agreeing to hand over his assets as part of the bribe.

JTClone's prized possessions were valued at a total of approximately 8 billion isk. Now all he needed was for 12 billion in cash to miraculously fall into his lap.

The world's greatest brother struck again. No Honor Bounds handed JTClone 12 billion isk, no questions asked. The chances of loyalanon being paid rose exponentially. However, the money came with strings attached: Now that No Honor Bounds was involved, loyalanon ran the risk of being blacklisted from virtually every alliance in nullsec--including Pandemic Legion--if he didn't keep up his end of the bargain. JTClone had powerful siblings in nullsec. 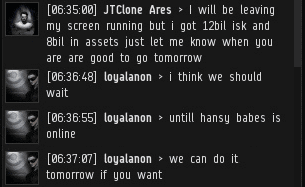 The two agreed to make the exchange the following day, when Pandemic Legion representative Hansy Babes was available. In the past, JTClone had resisted allowing loyalanon to name the escrow agent. Now he'd come around to the idea. After all, JTClone had the insurance policy of his brother's threat to blacklist loyalanon from PL. 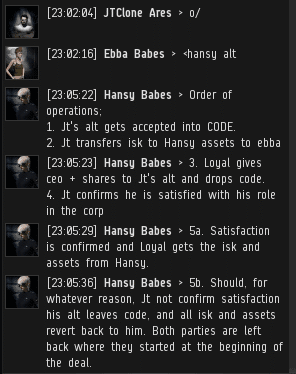 The next day, everyone in the conspiracy gathered for their final meeting. Hansy Babes, a living, breathing member of PL, appeared for the first time. Hansy explained the ground rules for the transaction. Everyone was satisfied by the fairness of their host.

It was the moment of truth. JTClone transferred 12 billion isk to the escrow agent's designated alt. 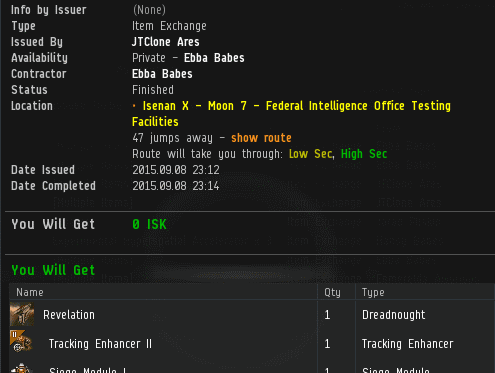 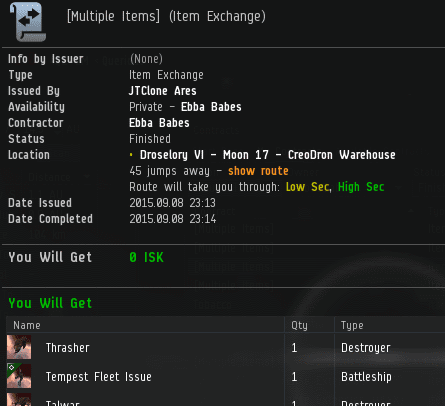 Then came two contracts for JTClone's non-liquid assets. In all, more than 20 billion isk was handed over. JTClone put everything on the line to destroy CODEdot once and for all. He'd held up his end of the bargain. Now it was time for loyalanon to transfer control of CODEdot to JTClone's alt, Star Striker Funaila. To ensure that everything went smoothly, JTClone met up with loyalanon on TeamSpeak. They were soon joined by several other members of CODEdot, including JTClone's arch-nemesis, TheInternet TweepsOnline TheInternet, who recorded the occasion. 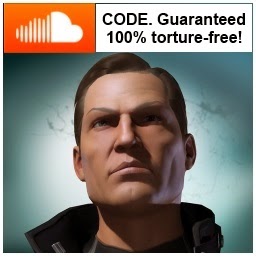 SOUNDCLOUD: A transaction with JTClone Ares
For those who do not wish to listen to the entire recording at this time, here's a brief summary of some of the events captured on TeamSpeak:

loyalanon asked JTClone to tell the Agents what was about to happen. The Agents played along, hoping to catch the conscience of the carebear. JTClone couldn't resist gloating about his victory. He made it clear that once he took ownership of the alliance, the Code would no longer be the top priority. In fact, he only seemed to care about his own ego! The Agents were appalled.

loyalanon had a great deal of trouble figuring out how to use the corporation interface to give JTClone control of the alliance. JTClone repeatedly checked in with loyalanon to see how it was coming along. Matters were further complicated by the absence of Hansy Babes, who had gone AFK shortly after taking possession of all of JTClone's assets.

The proceedings hit another snag when it was revealed that JTClone Ares was actually not in possession of a New Order mining permit. Since PL-sponsored transactions are performed according to the Code, the status of the whole deal was thrown into doubt.

JTClone still held his trump card: He reminded loyalanon of the EVEmail sent by his brother, threatening to blacklist loyalanon from all the nullsec alliances. loyalanon shrugged.

As events progressed, the Agents became increasingly concerned about the possibility that JTClone's brother did not really exist. JTClone promised that he did, but then he got a bit wobbly on the subject. He said that No Honor Bounds was "like" a brother, or that he "considered him a step-brother". But when the Agents requested that No Honor Bounds appear on TeamSpeak, JTClone and his brother started to experience serious technical difficulties of their own. A shocking admission of account sharing was made.

Finally, JTClone accepted that the whole thing was a scam all along. In retaliation, he claimed that he worked for The Mittani and that everyone was in big trouble. He threatened to destroy EVE, but also said that EVE was already deteriorating because people didn't keep their word. 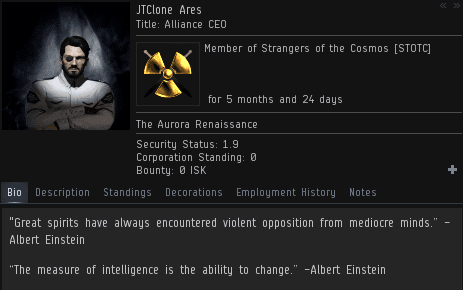 In the end, JTClone's diabolical plan to destroy the New Order failed. As it turns out, the Code always wins. Always. JTClone biomassed his alt, Star Striker Funaila, in disgust.

As for JTClone's brother, he was never seen or heard from again. He biomassed himself. CODEdot's relationship with Pandemic Legion and the rest of the nullsec alliances is currently unknown.

Will JTClone Ares learn his lesson from all this, and will he find it in his heart to embrace the Code, instead of opposing it? I'm cautiously optimistic!
Posted by MinerBumping at 18:49