Previously, on MinerBumping... JTClone Ares and his alliance came under attack from a series of wardecs instigated by Agent TheInternet TweepsOnline TheInternet, who also managed to turn one of JTClone's corpmates into a spy. When put to the test, it became clear that JTClone was continuing to badly lead newbie PvE'ers, and that he still harbored a grudge against the New Order. After being repeatedly provoked by TheInternet, JTClone embarked on hunt for the mole inside his corporation.

"When you read this I want you to get online and leave my damn alliance. I already know you gave your API to pilots i walked away from for 9 months and could care less about. They just assholes who want power and nothing else. Just remember You can't pull the same crap on me over and over and over again. I do catch on quickly. So next time you say you are a director in my corp think again. Your roles are gone now get the fuck out of my corp.

P.S. Don't piss off an Alliance CEO who has more power then you do."

Perhaps unsurprisingly, JTClone wasn't very good at counterintelligence work. Gripped by paranoia, he imagined Agents everywhere, even among his closest friends and most trusted advisers. JTClone purged his own intel chief and main recruiter, silverone coldheart. In fact, silverone hadn't betrayed JTClone. But after being insulted and kicked from the alliance for no reason, he forwarded the EVEmail to TheInternet.

JTClone knew the alliance's spy was in his own corp, but had no idea who it was. He began frantically purging the corp of everyone who looked suspicious. At least a dozen members were booted from the corp; you can see the effect of the purge on the far right of the graph. But none of the expelled members were the spy.

TheInternet then sent EVEmails to everyone in JTClone's alliance, telling them the truth about their leader. Some reacted badly to the news. 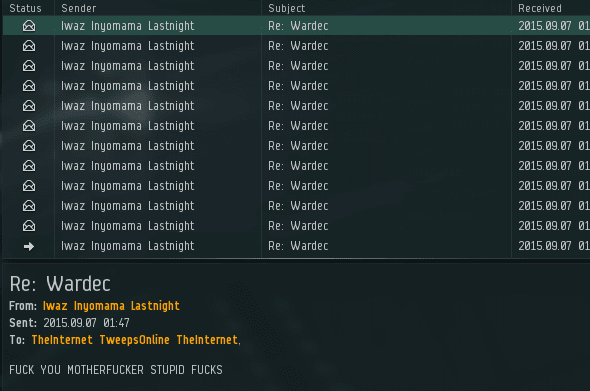 Despite the resistance, JTClone's reputation was taking a hit as more of his alliance members investigated his history.

Hey guys there is currently a mail going around that is full of shit that is being setn by TheInternet TweepsOnline TheInternet. Please add him to your block list he is not a current legit dilpomat so if you see him delete the mail or just let me know. He is trying to stir up trouble after i had kicked the spy out. IT is taken care of and has been dealt with. If you guys have questions just let me know. I will take the time to talk to you and explain the details with you.

To combat the propaganda, JTClone told everyone to block TheInternet. He also insisted that everything was fine, and that the corp's spy had been removed. But the spy remained. S/he continued to send TheInternet intel, believing that TheInternet was using his/her access to locate the corp's spy.

TheInternet TweepsOnline TheInternet is a nice juicy maggot who i wanna eat one day.

Protip: If your alliance leader sends a corp EVEmail like the above, you may want to reconsider your employment options.

You are, like every remaining member of corp, recieving this mail as an official warning from the New Order of Highsec. The specific reason I am contacting you is because of the war between your corporation and the CODE. alliance.

Many of you are new players, and there is no need for this war to result in any loss for you. CODE. has no grievance with you.

Your leader, JTClone Ares, is lying to you about everything. The corp you are currently in isn't a good corp. If you are interested in joining a good corporation, join KarmaFleet. Here is their recruiting channel: KF_Public

The war goes live tomorrow, and it will last longer than one week. If you undock during the war, we will destroy your ships. If you are still in corp after the war goes live, you will either stay docked up or experience losses.

JTClone is lying to you about everything. According to JTClone, "...there is currently a mail going around that is full of shit that is being setn by TheInternet TweepsOnline TheInternet. Please add him to your block list he is not a current legit dilpomat so if you see him delete the mail or just let me know. He is trying to stir up trouble after i had kicked the spy out. IT is taken care of and has been dealt with."

Sure. "It is taken care of and has been dealt with".

Just another one of JTClone's lies. Or is he just delusional?

We very clearly still have spies in your corp. JTClone does not have a plan for victory. The war starts soon.

You should leave the corporation before the war starts. This is your only warning. Mail me after you have left and I will provide you with a 10m ISK parting gift, courtesy of James 315. Many have fled already. Safety is on the outside.

Anti-Gankers love to wrap themselves up in the mantle of protecting new players. Yet anyone can see that the carebear CEOs provide newbies with the worst possible EVE playing experience. By contrast, New Order Agents like TheInternet work tirelessly to help newbies enjoy the game. 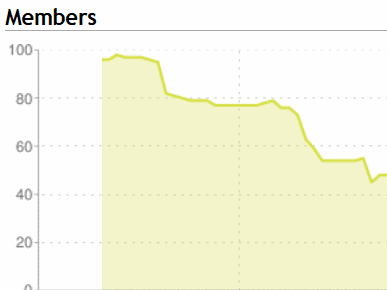 This cropped version of the Dotlan stats for JTClone's alliance tells the story: In only a month, the alliance lost half its membership. TheInternet's EVEmail campaign was working--along with the wardecs and JTClone's paranoia.

...Which brings us back to the story already in progress. JTClone played it cool, but on the inside, he was bubbling with rage against the New Order. He wanted badly to accept loyalanon's offer to disband CODEdot for 20 billion isk. Lacking the money, however, he could only entertain the possibility of making the bribe at some point in the future. 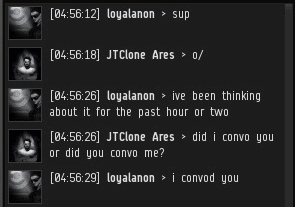 JTClone remained on top of things as ever. 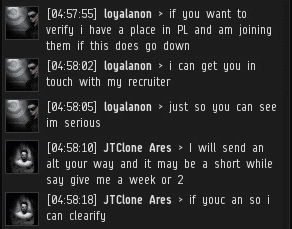 The basis for the conspiracy was that loyalanon planned to join Pandemic Legion and was therefore willing to burn CODEdot on the way out. 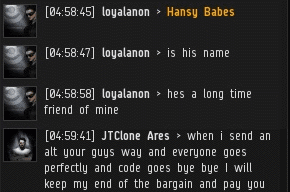 Though loyalanon claimed to have a legitimate contact in PL, JTClone remained cautious. If the plan were to move forward, it would be on JTClone's terms and no one else's. He would only pay the 20 billion isk after CODEdot was destroyed. He wasn't going to let anyone scam him out of all his stuff. Not this time. No sir.