Previously, on MinerBumping... JTClone Ares struck a deal with loyalanon to disband CODEdot for 20 billion isk. JTClone admitted that he lacked the money, and there was a disagreement over how they would ensure payment of the funds. JTClone left the stage, only to be replaced by No Honor Bounds, who claimed to be JTClone's older brother. Typically, people aren't easily impressed by their younger siblings. But JTClone's alleged brother was full of praise for JTClone. 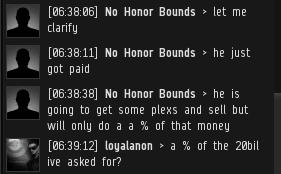 The stench of RMT appeared. I've never loved the idea of people using real money to PLEX their way to in-game wealth, but it is legal. 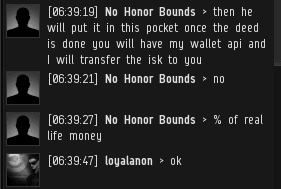 The rebel leader's alt/brother explained that although JTClone intended to purchase more spacebucks, he wasn't going to spend his entire paycheck on it. This is a good philosophy, just like "Don't fly what you can't afford to lose." Only spend a percentage of your paycheck on PLEX. 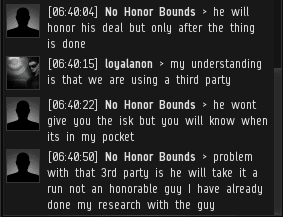 No Honor Bounds claimed to be a long-time EVE player who knew all the major players in nullsec. Previously, he'd spoken well of loyalanon's proposed Pandemic Legion escrow agent. Apparently he'd changed his mind since then. JTClone's brother offered to serve as the escrow agent himself--a neutral third party.

A milestone was reached: No Honor Bounds' character portrait finally showed up. He was a bit more than an hour old.

Once again, JTClone's faithful brother sang his praises. Nothing new was offered, though. Anyone who reads MinerBumping could tell you how smart JTClone is, and how good he is at knowing when to trust someone. As JTClone's brother, as someone who has known the prominent Anti-Ganker his entire life, it was time for No Honor Bounds to give us some real insight, with inside information...

The neutral third party began to tell a personal story about JTClone. At the same time, loyalanon chose to go AFK for a while. From this point forward, JTClone's brother would deliver an uninterrupted monologue about JTClone until he ran out of things to say. 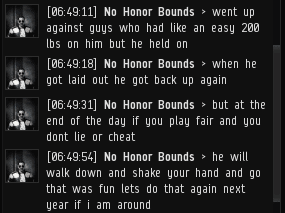 Most people don't know about the highsec mining specialist's equally impressive football record. He deftly maneuvered his way past opponents weighing 200+ pounds more than himself. No doubt his extensive familiarity with Sun Tzu's teachings helped with that. 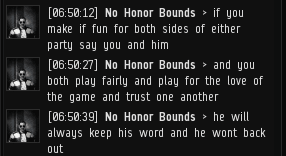 The noble JTClone wasn't in it for personal glory, though. It was all for love of the game. Just like his accomplishments in EVE. 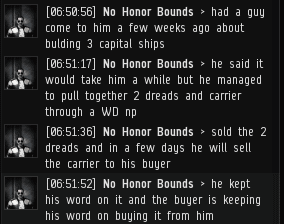 If you weren't impressed by his legendary efforts on the football field, consider this: JTClone once built three(!) capital ships. 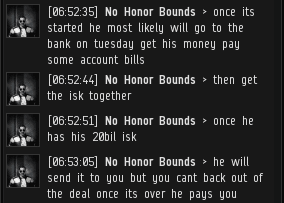 No Honor Bounds' paean to JTClone had a central theme: The man was trustworthy. He could be trusted to deliver the 20 billion isk after loyalanon disbanded CODEdot. There was no need for a PL member to serve as escrow agent. 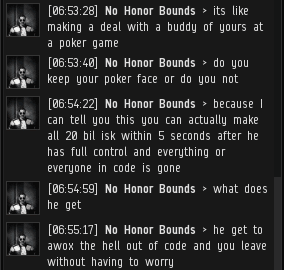 I don't think No Honor Bounds knows how poker is played. I'm sure he'd be the first to tell you that. Then he would mention how awesome JTClone is at it. 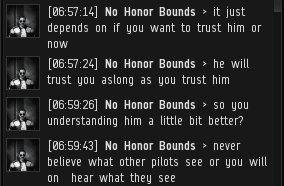 JTClone's brother finally wrapped up his lecture on his favorite topic. Unfortunately, loyalanon was still AFK.

...And so No Honor Bounds kept on talking, interjecting an appropriate quote from the very quotable JTClone. When loyalanon eventually returned to his keyboard, would he be persuaded? Or would he find some way to turn the tables on JTClone?