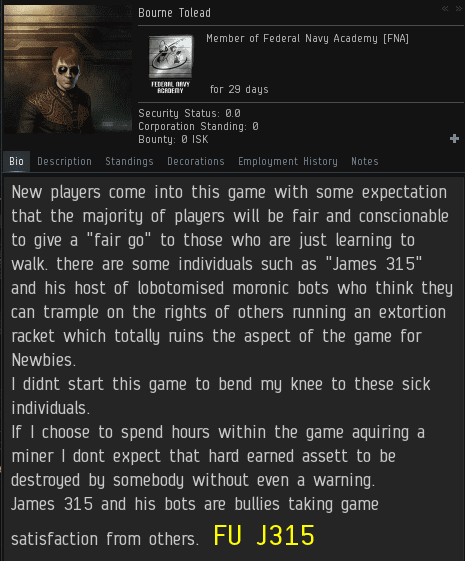 ...you know it's about time for the next edition of the Highsec Miner Grab Bag.

Agent V-ktor Dolus has discovered evidence of a new form of bot-aspirancy: Carebears who don't bother to anchor their ship assembly array inside the POS shields!

Agent Salah ad-Din al-Jawahiri could give this carebear a lecture on the Code, but instead he chose to reveal the Code in a series of questions:

Unfortunately, the carebear couldn't get past the first question.

A miner joined Agent Liek DarZ's fleet expecting Orca bonuses and such. She joined the wrong fleet, I think. Or maybe she joined the right fleet--she was soon ganked by our Agent, which was precisely what she deserved.

There's a reason why most surveys have a section for "Don't Know/No Opinion".

This carebear would be heartbroken to know that CCP devs are given laminated mining permits at fan events.

Ah denialists. For a Code that doesn't exist, it certainly has a lot of influence these days.

To be fair, our Agents usually don't buy ships with their mothers' RL money. We have X-FEANOR's RL money for that. 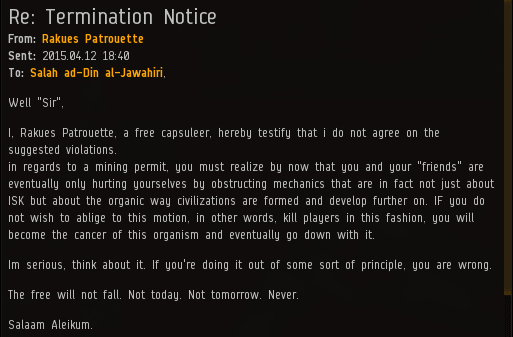 I think Rakues Patrouette is confused about the way civilizations develop. I'm not sure why; it's explained right at the beginning of the Code!

Luckily, the carebear promised not to get mad.

Although I get a fair number of angry EVEmails, I also receive a lot of random requests for forgiveness. Highsec miners must perceive that I am a very forgiving person.

Impressively, most apologies I receive are sincere, and not of the political, conditional "If I offended you, then I apologize" variety. Their sincerity is rewarded. I'm always willing to forgive EVE players who are willing to make up for their crimes.
Posted by MinerBumping at 19:07