As the power of the New Order grows, so too does the number of Code-compliant miners. Thousands of highsec miners own permits. The rebels don't like this, so when they encounter permit-owners, they encourage their fellow miners to forsake the Code. For the rebels, it's not about shutting off a revenue stream to the New Order; they're worried about our regime taking root and gaining legitimacy. 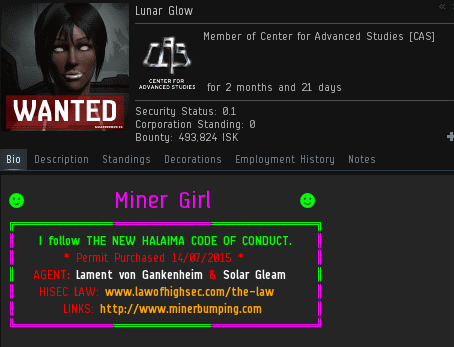 Though rebels often float the idea of ganking permit-owners, it's far too much effort. They attempt to use peer pressure instead.

Roniin Makami came across Lunar Glow, a proud, permit-carrying miner. He was so outraged by her bio that he invited her to a private convo to talk about it.

Roniin made some standard rebel arguments for not buying a permit. First, he asserted that permit-owners are targeted by the very Agents who sell them permits. Second, he hinted that permits aren't worth it due to all of the miner gankers unaffiliated with the Order.

In truth, the New Order is responsible for nearly all miner ganks in highsec. After the great barge buff of 2012, miner ganking shrank to almost zero. We brought it back. And everyone knows that our gankers prefer to shoot rebels over permit-owners.

Roniin's ignorance showed. Mining permits cost the same today as they always have. They're ridiculously affordable.

Roniin declared that he was as safe from the New Order as the permit-owners. He'd never, ever, ever been ganked by us, and he never, ever, ever would be. He also insisted that he practiced "due diligence", keeping a sharp eye on local. Bold claims. Were they true? (Protip: Never trust a carebear.) 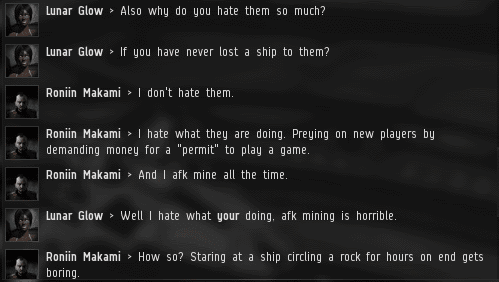 Roniin's bragging about "due diligence" didn't last very long. Almost immediately, he admitted that he AFK mines all the time.

In fact, Roniin greatly enjoys AFK mining. It didn't take much to get him talking about all the things he loves about it. 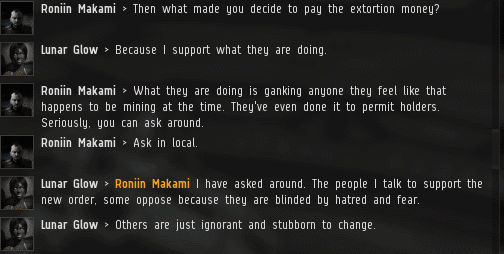 An irony presented itself: Roniin insisted that if Lunar Glow simply asked in local, she would hear all about how permit-owners get ganked. Yet Roniin himself was speaking to a permit-owner who said otherwise.

Roniin dismissed Lunar Glow's positive experiences with the New Order. She was only a newbie, Roniin said. Not a highsec expert like himself.

Lunar Glow did something shocking, something Roniin could never have expected: She asked for evidence. In theory, if hundreds of mean ol' New Order Agents are running amok across highsec, behaving in an unseemly manner, there should be plenty of proof. EVE players automatically log such evidence. Unfortunately, Roniin couldn't find any. His logs showed nothing.

Since he didn't have any logs to present, Roniin urged Lunar to listen to what people were saying about the New Order. He couldn't direct her to anyone in particular, other than himself. Lunar replied that she'd seen plenty of evidence of what really goes on in highsec on MinerBumping. However, Roniin was afraid to visit the blog. Everyone who reads it gets a computer virus.

On an unrelated note: Dear reader, you may have already won a free iPad. Would you like to know more?

Deeply frustrated by his inability to persuade Lunar to burn her mining permit, Roniin parted ways with her. He accused Lunar of being blind and ignorant and inexperienced--and that she knew too much. Carebear logic.

Lunar Glow promptly reported Roniin to the authorities. He'd confessed to AFK mining, after all. Although Roniin said he could never be ganked by the New Order, an Agent was dispatched and he met his fate within a few hours.

That's the problem with rebel miners trying to use peer pressure. They're not peers at all. Gallant miners are plainly superior.
Posted by MinerBumping at 18:16