X-FEANOR is quickly becoming the most famous freighter pilot in highsec. He's certainly the most watchlisted. According to his zKillboard stats, X-FEANOR has lost 148 billion isk in the last year. Astonishingly, that figure comes from only 29 losses, giving X-FEANOR a 5 billion isk average loss. No wonder he's attracted so much attention.

X-FEANOR first appeared on our radar with his extravagant pod losses, such as this one, which was worth around 10 billion isk at the time.

The first question was an obvious one. It's a question any economically rational person would want to ask:

X-FEANOR revealed that he is in possession of 200 billion isk. Even if true, he has lost a decent percentage of his wealth through ganks.

(Russian greatness is a surprisingly common consolation for carebears who suffer big losses.)

But if X-FEANOR wasn't willing to obey the Code for economic reasons, he should at least do it for my sake, for the sake of the Saviour of Highsec. Right?

X-FEANOR wouldn't listen. For some reason he's not a big fan of mine. 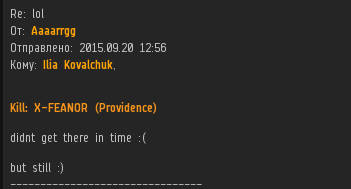 On September 20th, X-FEANOR was back to his old tricks...

In a single day, he suffered three multi-billion isk losses. After the first freighter loss, he sent this explanation to our Agent:

X-FEANOR spends lots of money on PLEX for isk. He uses the isk to buy expensive freighters and implants... to try to accumulate more isk. When he fails, he buys more isk with PLEX.

So if you ever wonder what was X-FEANOR thinking, I guess you have your answer.
Posted by MinerBumping at 17:37