Previously, on MinerBumping... A chance encounter with a bot-aspirant Hulk led to a legal crisis in highsec. The Hulk belonged to a "paying client" of Admiral Foxbolt, who had returned to EVE to provide player-retention services. After unsuccessful negotiations with our Agents, Foxbolt warned of the imminent banning of everyone in CODEdot. He claimed he had the full support of CCP.

Immediately afterward, Foxbolt drafted his recommendations to CCP on how to handle the Hulk incident. The considerate player-retention specialist forwarded a copy to key members of CODEdot--as well as his client. That way the Hulk pilot would know what he was paying for.

Foxbolt believed in a contradiction: That ganking is legitimate and allowed, but still constitutes harassment. You've heard of the "Ganking Is Bullying" movement, but you might be surprised how common the "ganking is harassment" belief is. For example, consider noted EVE blogger The Nosy Gamer, who typifies the "ganking should be allowed, but it's harassment [and therefore shouldn't be allowed]" sentiment.

For all his faults, Foxbolt managed to at least concede one of the other contradictions of the theme park crowd: Highsec PvP'ers have accounts, too.

Since Agent loyalanon wouldn't reimburse the Hulk, Foxbolt needed to get the money for his client from somewhere else. CCP has the power to print unlimited isk, so Foxbolt hoped they would step in.

Foxbolt concluded his petition to CCP. If there was any doubt that he directly equated ganking to harassment, it was dispelled by his final two paragraphs. In addition to requesting isk from CCP, Foxbolt casually suggested that they remove ganking from "zones" in highsec. 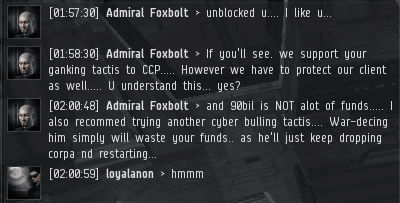 Nevertheless, Foxbolt was intrigued by his nemesis. He agreed to a casual convo to discuss matters while CCP's top men reviewed his proposal.

The main disagreement between the two sides came down to the Code. Our Agent held to his conviction that the best way for Foxbolt's organization to protect miners was to buy permits in bulk.

loyalanon offered to sell Foxbolt a permit for 10 million isk. He knew a tough customer when he saw one, but it was worth a try. 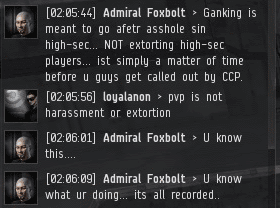 Interestingly, Foxbolt did make an attempt to untangle the "ganking is legitimate gameplay but illegitimate harassment" knot that goes unquestioned by so many carebears. According to Foxbolt, ganking should be allowed, but only if the target of the gank is an "asshole". Even if this position were to be adopted by CCP, I'm not sure it would have much of an impact on our operations. 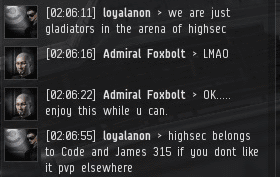 With Foxbolt's proposal being run up the chain of command even as they spoke, the New Order's days were numbered. 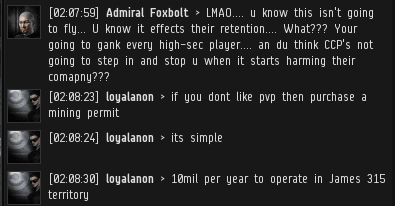 loyalanon didn't have the heart to tell Foxbolt that CCP's own study demonstrated that ganking improves player retention. For now, it was more important that Foxbolt buy a permit.

War was on the horizon. Highsec would never be the same.