Sounds like someone went on a trip and didn't bring his New Order mining permit with him. Don't make that mistake! Please get your paperwork in order and enjoy this edition of the Grab Bag. 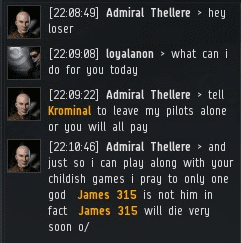 Presumably Admiral Thellere means that I'll soon die in-game. Clones are free these days, so why would that bother me?

Click for full-size version
Based on an exhaustive review of the available intelligence, Admiral Thellere intends to attack New Order territory and destroy the Code. On the other hand, he biomassed himself.

Let's set the record straight. The New Order never exploits game mechanics. Nor do we exploit EVE players. You can read about our exciting exploits, though.

Say "no" to drugs. Say "yes" to the Code. A lot of miners have that backwards.

I know Freudian psychology has fallen out of favor these days, but there might be something to it.

Did you need the "kid" square on a recent game of Miner Bingo? Too bad you didn't run into Nikita Paval.

Nikita also would've been good for a "faggot" and a "rape", had those potential squares made the final cut.

Code > Kill Rights, any day. If CCP really wants to help miners, they should earn Code Rights each time they're ganked.

Stuskie claimed to be an innocent man. He didn't act like one, though. Those are the tears of a guilty carebear.

Miners often complain that they didn't receive sufficient warning before being ganked. But as you can see, they usually don't "get" the Code until their ship is on fire. 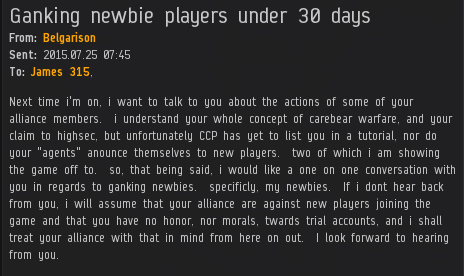 Belgarison was ready to make some truly dangerous assumptions about our attitude toward newbies and players with trial accounts. Friend, let me put your concerns to rest. Newbies and trial account users get the same benefits of the Code as everyone else. 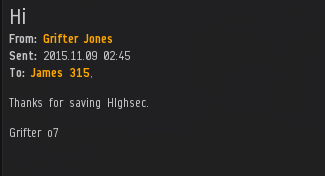 Hey, you're welcome, man.
Posted by MinerBumping at 16:33