Previously, on MinerBumping... A New Order Catalyst scored an extraordinary victory against an AFK Hulk, but the battle was only beginning. The Hulk pilot turned out to be a "paying client" of BATTLESTAR FEDERATION., a corp dedicated to helping CCP retain its players. In a shocking twist, the leader of BATTLESTAR FEDERATIONdot was revealed to be none other than Admiral Foxbolt, who rose like a phoenix from the ashes of his own biomass. He threatened to report CODEdot to CCP if his client was not reimbursed. 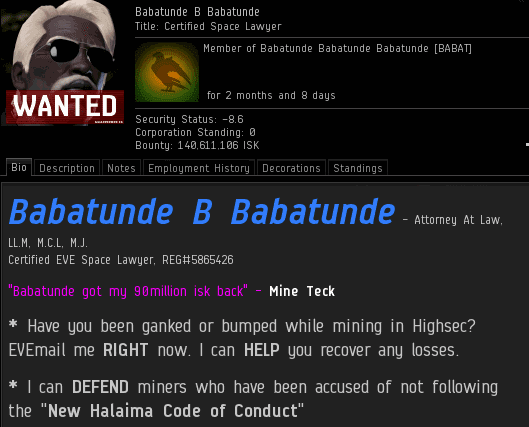 Highsec is no stranger to space lawyers. The most successful of these, Babatunde B Babatunde, was hired by Mine Teck to tie our Agents in red tape. His exemplary legal career came crashing to a halt when he mysteriously disappeared within hours of publicly announcing he'd discovered a loophole in the Code. Babatunde was biomassed, but, like Admiral Foxbolt, he eventually resurfaced. Unlike Foxbolt, Babatunde returned to the game with a different perspective; he switched sides to join CODEdot. By contrast, Foxbolt was more committed to his cause than ever.

As if anticipating yesterday's MinerBumping post, Foxbolt foresaw a truly legendary confrontation. He claimed to have a secret weapon: The complete endorsement of CCP.

Since Foxbolt refused to meet with Agent loyalanon on TeamSpeak, a neutral third party was called in to help negotiate a compromise.

The clock was ticking. With just moments to prepare, Agent AeleDeux had to play catch-up. And he was running out of time.


AeleDeux > ok, so you are his legal rep?
Admiral Foxbolt > Our clinet sees teh war dec.. he will be dropping corp... The isk ha sjust be wasted.....
AeleDeux > i dont know anything about this. ok let me explain what i do
Admiral Foxbolt > Waiting on resolve... u and CCP has all intel needed... You dont want CCP involved.... but if CODE wants to play hardball.. we will win...

Hardball confirmed. Despite Foxbolt's insistence that the Hulk pilot was protected by his player-retaining organization, somehow the Hulk pilot's corp got wardecced by CODEdot in the meantime. Tensions escalated.


AeleDeux > I am contacted from time to time from James 315 to look into these matters
AeleDeux > i am generally at arms length from the everyday activities of the CODE alliance
Admiral Foxbolt > It simple really... what CODE is doing is costing CCP money.. we now have proof that CODE is hatassing CCP customers new to EVE.... We win. Pay 160mil to Praetor Venerabilis or we'll press this issuer with CCP.

Highsec is on the cutting edge; new forms of emergent gameplay evolve all the time. It's not the kind of place where you can be trained for everything in advance. When you become an Agent of the New Order, you often get thrown into the deep end--and you sink or swim. AeleDeux was up for the challenge, but the odds were stacked against him.

Our Agent urged Foxbolt to give him more time.

There it was, the smoking gun. Foxbolt had ironclad proof that his client had indeed been ganked.


Admiral Foxbolt > Please send 160mil... and the issue will die.. and you can harss other players... but not ours..
Admiral Foxbolt > Our corp mates pays my company to assist them.... My company has CCP's approval o help their company with retention efforts. CODE is sadly at a loss here..... Im not going to debate this.... Return the funds from the high-sec harassment or we will cease
Admiral Foxbolt > cease efforts.
Admiral Foxbolt > (Im very aware that CODE is attempting to gather intel to fee to CCP.) Senior GM knows everything about us... He was the approving party.... For the Record. Gotta love EVE bro...lol
Admiral Foxbolt > Senior GM Cid***

Foxbolt wouldn't budge. He was absolutely confident. His high-powered space law firm had the intel and the connections. And he wasn't afraid to name-drop.


AeleDeux > listen, i will forward this chat log to CCP. If what you are saying is a lie, that can result in a blanket ban. It is CCPs policy not to interfer with players. If you have a complaint about any of our members break the EULA put in a pitition
AeleDeux > we gank ships all the time
AeleDeux > i am about to blow up a miner right now
AeleDeux > what makes you case any different
Admiral Foxbolt > LOL.... this is great..... the ganking of our ships WILL stop.. give it time.. you'll see.....
AeleDeux > if CCP want us to stop, they will make it so you cant lock a player while in highsec
AeleDeux > have you read the code?

Just when he seemed to be on the ropes, AeleDeux shifted gears and went on offense. He challenged Foxbolt's knowledge of space law. Did he even know the Code?


Admiral Foxbolt > Real World cash make sit different... U see.. CODE has cost CCP millions in paying customers.... no one ever countered your bs.... Nic eto meet you guys... I'm the SheepDog thats going to guard my ppl from your tactics..
AeleDeux > ok calm down friend
AeleDeux > lets keep talking, we are making some progress here
Admiral Foxbolt > Negative ... Not friends.... take care. U gusy were given the chance to do the right thing here.. CCP will handle itf rom here... Fly Safe. (DO I look stupid.) Was a cop bro... FAIL

The convo was terminated. With that important line of communication closed, everything was uncertain.

AeleDeux's arguments had an effect. For the first time, Foxbolt showed signs of backing off, but only slightly.

Foxbolt remained confident that CODEdot would reimburse the Hulk pilot--or face extinction at the hands of a vengeful CCP.

To be continued...
Posted by MinerBumping at 15:48