Kren Badasaz has the privilege of starting off the ninety-second edition of the Highsec Miner Grab Bag. His EVEmail was full of nonsense, except for one sentence: "You won." He was right about that part. The CODE always wins!*

Some carebears get a bit too excited when they're introduced to PvP for the first time. That's when our Agents take extra steps to defuse the situation...

For all the talk about a certain Fanfest incident, it's the highsec carebears who routinely encourage their fellow EVE players to commit suicide.

Meanwhile, carebear apologists accuse CODE. members of "pushing the game past the boundaries into real life". It's amazing how our enemies' view of the world is an almost perfect inverse of reality. Do these people play on the same server as the rest of us? Is there another CODE. that I'm not aware of? 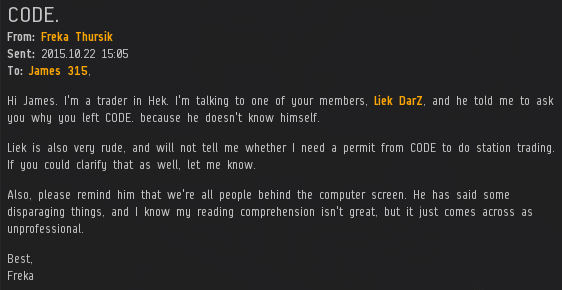 On the other hand, are you still considered to be "behind the computer screen" when you're AFK? If he's telling the truth, at least Ram0n Raz0r can't make excuses about being a new player.

Agent Zopiclone tried to explain that he was helping the miner he'd ganked, but Jagger Rovard didn't understand. EVE is a complicated game.

Even our enemies rarely compare us to the Illuminati. We're an open, transparent organization that hides nothing from the people. That's why you can trust us.

Don't worry about a Google translation of what Jagger said. When a French miner says "merde" to an Agent, all you need to know is that he's violating the Code.

Although we're committed to providing miners with all the answers they need, our Agents' time is not unlimited. But a digital copy of the Code is always available for download--free of charge, if you can believe it!

Should I accept what GuanrdianJam is saying as true? He sounds like a Goofus...