Since the dawn of EVE, can-flipping has been one of the game's most iconic and enjoyable activities. It is also rightly considered to be an elite form of PvP: A can-flipper must fly a ship seemingly weak enough to entice their enemies to attack. But in 2012, CCP virtually eliminated can-flipping by giving miners a voluminous built-in ore bay for their ships. This error was compounded later in the year when CCP implemented a "Crime Watch" system designed to make carebears immune from making mistakes related to the aggression mechanics.

Based on mistaken assumptions of what keeps people playing EVE, CCP believed that making highsec safer and less fun would improve player retention and subscription numbers. Instead, the number of EVE subscribers cratered. 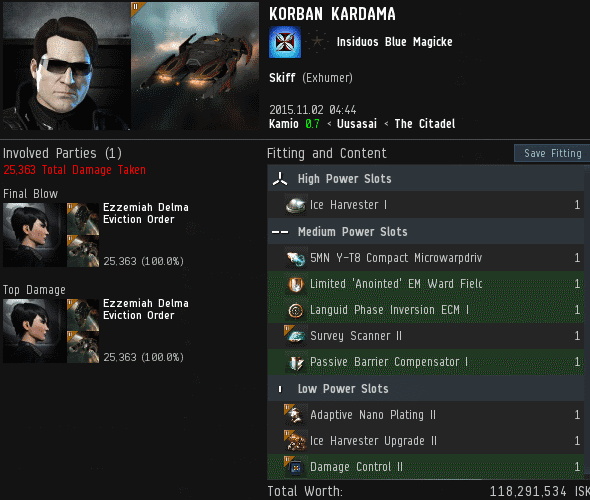 Despite the nerfs, there are still those who practice the old ways. When you see something like Ezzemiah Delma's righteous kill of KORBAN KARDAMA's Skiff, it could be a wardec. Or it could be a sign that the tradition of aggression gaming lives on. 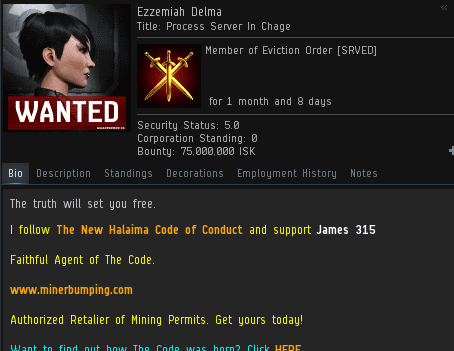 Ezzemiah was on patrol in Kamio when she saw KORBAN's Skiff and a nearby Procurer mining ice without a permit. Incredibly, they were using a jetcan to store their ice! Ezzemiah promptly confiscated the ice, removing it from their jetcan with her Ishtar.

So much for "ships that can't shoot back": The Skiff and the Procurer opened fire on Ezzemiah's Ishtar with their combat drones. Because the Ishtar had gone suspect for taking the ice, the miners weren't CONCORDed. However, our Agents are every bit as formidable as CONCORD. Ezzemiah engaged in honourable combat with the miners, destroying the aforementioned Skiff, along with the Procurer and the Skiff's Capsule.

KORBAN convo'ed our Agent. Though KORBAN was Ezzemiah's mortal enemy and had tried to kill her, she couldn't have been more pleasant or helpful.

Ah, the "would have paid" miner. They are a strange breed. For people who would've paid, it's surprising how infrequently they actually pay.

Within seconds, the miner did what miners always do: He lied. KORBAN pretended to be ignorant of the Code and the permit requirement, even though he had just said that he "would have paid the 10 million".

Contrary to highsec law, KORBAN failed to remain calm after being killed. He didn't even offer Ezzemiah a "gf". This whole conversation was going south, fast.

Curiously, a miner who didn't follow the Code nevertheless held to an intricate set a beliefs about how players should conduct themselves in highsec. It's as if carebears have their own, unwritten code. No podding, no baiting, no having fun of any kind.

Though carebears often complain about suicide ganking mechanics, they still lose when it comes to combat that doesn't involve suicide ganks. Ezzemiah isn't a suicide ganker. But she's an Agent of the New Order, so she, too, always wins (always).

Living in highsec and not knowing about the Code is the equivalent of going to the northern reaches of nullsec and being surprised by the existence of the Imperium, Goons, or The Mittani.

The trigger-happy carebear shot first and asked (a lot of) questions later. Hypocritically, he tried to impugn the character of Ezzemiah for finishing the fight he'd started himself.


Ezzemiah Delma > You need to calm down, miner. I am here simply sheding light on the situation. No need to be crass.
Ezzemiah Delma > I think you should get your mining permit and become Code compliant. Then you wont have to worry about me confiscating your Ice
KORBAN KARDAMA > your self rightious attitude does not excuse the fact that you willingly destroy many hours of work to satisfy being a bully

Ezzemiah was astonished by the miner's attitude. It was as if KORBAN considered Ezzemiah a bad guy simply because she'd won the fight. Could someone with such a topsy-turvy view of EVE ever be persuaded to calm down and buy a mining permit? Or would KORBAN do the other thing, and descend more deeply into madness?