Welcome to the Mining Channel

Everyone knows about the Anti-Ganking channel and how toxic it is. There's also an in-game "Mining" channel. Is it any better?

The good news: Agents of the New Order occasionally frequent the Mining channel. The bad news: There are miners in the channel, too.

Shamus Igunen has been playing EVE for the last 4 years. He's spent nearly all of that time mining in highsec. For the past two years, Shamus has been among the most vocal members of the Mining channel.

When Agent Liek DarZ made a surprise appearance, Shamus was appalled. He didn't want to hear from a member of the New Order. 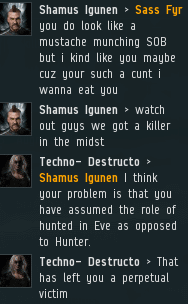 Sometimes people accuse the New Order of exploiting angry miners by harvesting their tears. The reality is that we always try to help the miners. Techno- Destructo gave Shamus some great advice. Would he take it?

Unfortunately, the longer a conversation goes on, the more enemies a Goofus tends to make. Shamus began lashing out at everyone around him. He accused them of "ruining my mining chat". He probably prefers the Mining channel to be silent, like when local is filled with AFK miners. Shamus would make a good EVE-O forum moderator.

Shamus Igunen appointed himself spokesman for the miners of highsec and everyone in the Mining channel. Then he set to work addressing his main concerns:

Is it my imagination, or have the miners been getting even more nihilistic lately? I suppose that's what failing nonstop daily does to a person.

EVE's subscription numbers may be falling, but the number of Code-compliant miners has been growing steadily. The rebel miners, forced to face this reality, haven't taken it very well.

The other shoe dropped. Shamus Igunen was among the last of a dying breed: The hardcore, unreconstructed denialists who believe there are no New Order Agents. In the very earliest days of the Order, miners accused all Agents of being my alts. The assumption was that no one else would be crazy enough to enforce the Code. These über-denialists died out when the number of Agents reached a certain level. But Shamus held fast to his delusions. He really thinks I have three hundred EVE accounts. He petitioned me to CCP for single-handedly ruining the game.

There's a fine line between being a GRRR CODE type, and growling at random people on a street corner. 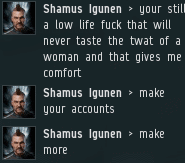 As the number of my alts climbs well into the hundreds, and as my alts successfully gank miners across a surprisingly broad stretch of time zones, Shamus is feeling less confident of a rebel victory. Still, he won't give up on the Mining channel--it's his home. The New Order won't give up on Shamus, either. Everyone in highsec belongs in our family.
Posted by MinerBumping at 19:28