On the Road to Victory, Part 1 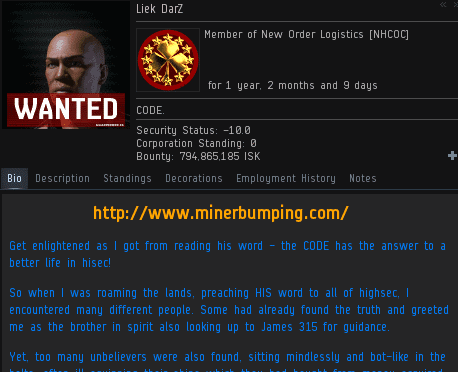 When people think about Agent Liek DarZ and consider the thousands of highsec miners he's killed, and the hundreds of billions of isk worth of damage he's inflicted, two words come readily to mind: Courage and integrity. I would add a third word to that list: Perseverance. 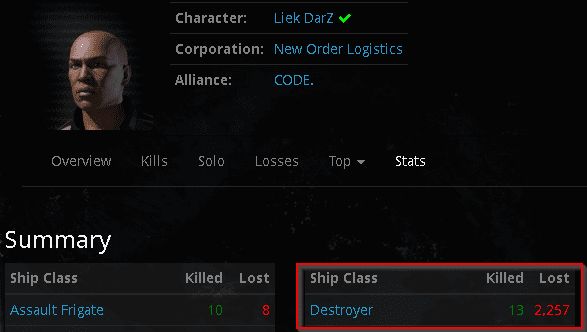 You see, Liek DarZ is a man on a mission. He seeks to enforce the Code, of course--that much is obvious. But there's something else that he's after. 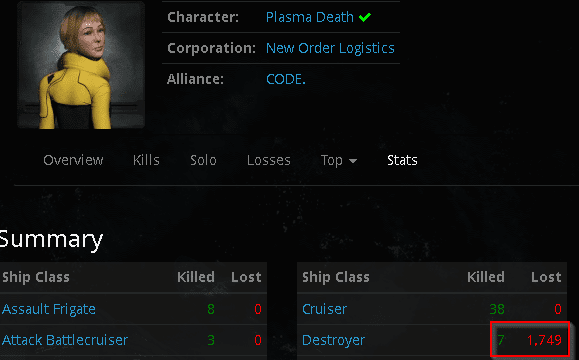 Along with alt Plasma Death, Liek has sacrificed more than 4,000 destroyers to the cause. It is a price he'd gladly pay again and again, if it gets him closer to what he's searching for.

As Liek quests through highsec, he encounters many carebears. Some, like Timothy Fidard, seem unable to free themselves from miner myths and clichés.

Agents of the New Order build relationships with the miners that they police. Liek is able to forge bonds with such carebears for many reasons, not least of which is that he's an exceptionally good listener.

As it happens, Liek DarZ is a good salesman. You'd think a product like a New Order mining permit would practically sell itself, but not when you factor in the bot-aspirancy problem. Still, Liek is able to sell permits at an impressive rate. Not with puffery or false advertising, but with the honest truth.

Mr. Like Literally Extortion ended up buying a permit for 10 million isk. Had he turned Gallant, or was he one of the Goofuses who managed to slip through the filter? You could tell he wasn't happy about buying a permit, so the smart money's on "Goofus".

Within seconds of buying the permit, Timothy tried to undermine the whole foundation upon which highsec society is based. Typical Goofus.

Timothy made a martyr of himself in the way that only an AFK PvE'er who never leaves highsec can. Liek resumed his mission.

The dignity and composure of a New Order Agent is something that even many of our enemies can appreciate. Freya Merkuriev wanted to spend all her time making a bunch of idle threats about kill rights, but she couldn't help herself. A little bit of respect slipped out. 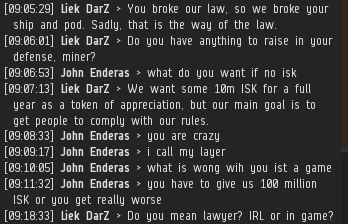 As Liek's travels continued, he found himself confronted by a gank recipient. The miner was angry about something. Liek genuinely wondered what the guy's problem was. You see that? Empathy. So much for the New Order being filled with "sociopaths".

Liek was stunned by the German miner's bellicose nature. The miner made it known that he was quite prepared to go to war in real life. As soon as he called his lawyer, anyway.

Despite this looming peril, Liek kept a laser-like focus on his goal. What was it? What did this Agent hope to achieve? And would he succeed?