The Worst Scammers in EVE 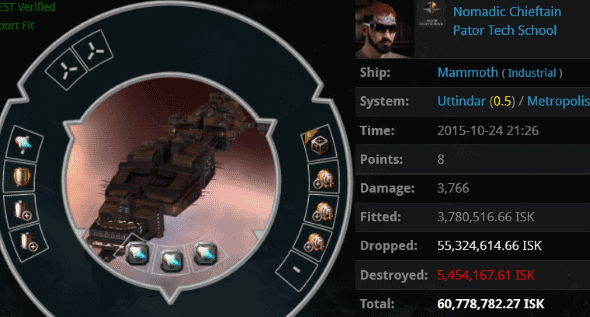 Another day, another criminal brought to justice by Agent Tisiphone Dira. She was getting ready to deliver her prepared materials about the Code, when suddenly--

The carebear in question was aggressive enough to seek answers on his own initiative. Nomadic couldn't believe that his spaceship had been destroyed in a spaceship PvP game. If Tisiphone wouldn't reimburse his loss, what would Nomadic do?

But Nomadic's luck was about to change. He hadn't been podded by Tisiphone, so he was able to watch as a local hauler pilot scooped the wreck. Nomadic convo'ed the hauler, who turned out to be helpful indeed.

As friendly as he was, Haulin' Ass still wanted to be fairly compensated for his services. How much would Nomadic pay for the safe return of the cargo?

The carebear requested delivery of the package at a 95% markdown. (With those instincts, he'll probably organize an ore buyback program for newbies one day.) Haulin' was stunned by the carebear's greed. When he pointed out the unfairness of the offer, Nomadic scoffed, condemning Haulin' for not working hard enough for his isk.


Haulin' Ass > Right, but at the moment I'm sitting on 50m just for stealing from him
Nomadic Chieftain > 15 million then.
Haulin' Ass > I'll take no less than 25 on one condition, you show me the contract, take a screenshot of it
Haulin' Ass > That way I can see the collateral

If he wanted to, Haulin' could sell the contents of the package on the market for full price. Seized by greed and laziness, Nomadic couldn't see things from Haulin's point of view. Generously, Haulin' offered to sell the package for 25 million isk.

The package was part of a courier contract with 60 million isk collateral. If Haulin' didn't return the courier package intact, Nomadic would fail the contract and lose 60 million isk. Haulin' would save him from that fate for 25 million isk. But Nomadic didn't have that much money.

It turned out to be yet another lie from the carebear. Backed into a corner, he admitted that he had plenty of funds to cover the 25 million isk fee.

Unfortunately for the carebear, his attempt to deceive Haulin' failed, and he had no leverage. He paid the 25 million isk and was given a Plastic Wrap. Still, he grumbled about how little work Haulin' had done for the money. This from a guy who was AFK'ing courier contracts on autopilot and who had put in zero effort to avoid being ganked. Carebear logic, carebear hypocrisy. 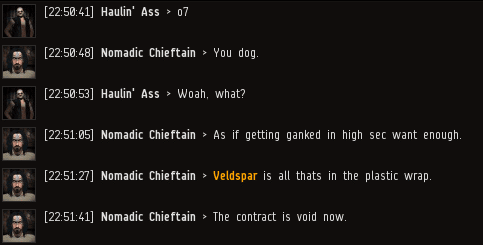 Eventually, the lying carebear opened the Plastic Wrap and discovered that he'd been given a taste of his own medicine.

EVE may be a cold, harsh universe, but there's a place where the good guys win. It's called highsec.

Haulin' Ass didn't have the heart to tell the carebear that he was actually an undercover Agent of the New Order all along. He was Tisiphone Dira's alt, in fact.

Nomadic put him on a "shit list" and returned to mining in a Venture. A few days later, his Venture was ganked and he was podded. By a member of CODE., naturally.

In the end, no one could say Nomadic Chieftain didn't get what he deserved. As we've seen over the years, carebears lie constantly. They complain about scammers and thieves, but they're so desperate for isk that they'll tell the wildest lies at the slightest provocation. The carebears of EVE are almost all scammers themselves. They're just really bad at it.
Posted by MinerBumping at 18:40