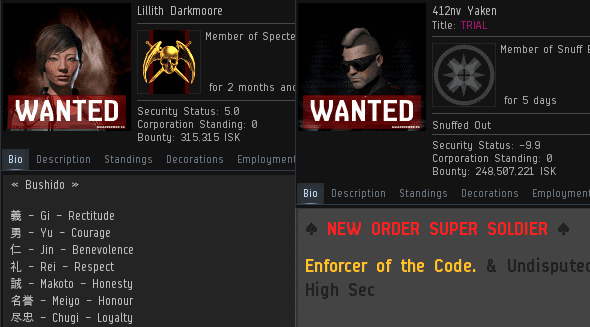 Clash of civilizations! Lillith Darkmoore lost a mining ship and an implant-filled pod worth a total of 4 billion isk. Agent 412nv Yaken was called in to investigate the possibility of a reimbursement. A dangerous situation was brewing. Lillith claimed to know powerful people in nullsec: The "null big boys"!


Lillith Darkmoore > yea I believe that your guys owe me a new set of implants and a ship
412nv Yaken > ok, can you walk me through what happened?
412nv Yaken > and link the kills

Though miners spend all day sitting in one place, they tend to get frantic once their routines are disturbed. Thus, an Agent's first job is usually to slow things down. 412nv wanted to take a methodical approach to the investigation.

Lillith wasn't interested in digging up killmail links. She wanted to cut right through the New Order bureaucracy and get her money back.

The highsec ice miner wasted no time in flaunting her credentials as an experienced EVE player who had nothing to do with highsec.

412nv Yaken must have smirked when Lillith referenced the nullsec "code". But he kept his cards close to his chest.

The two debated the proper procedure for killing someone in highsec. Miner and Agent both agreed that things need to be done a certain way. Perhaps they could find common ground.

Unfortunately, the two could not resolve their disagreement. Lillith believed that a highsec player must be contacted prior to any attack. Even if that's true, one could say that this blog is the contact. What is MinerBumping, if not an ongoing, multi-year conversation with highsec?

It was time to get down to business. Lillith's Option #1 was that she be reimbursed the 4 billion isk that she'd lost. In exchange, she would pay 10 million isk for a mining permit. Everyone would walk away friends.

Option #2 was for Lillith to talk to the null big boys. That would represent an existential threat to the New Order. As we all know, nullsec fleets love to travel 50 jumps to highsec and shut down suicide gankers using all of their elite nullsec skills.

Our Agent hadn't yet decided whether he wanted to go with Option #1 or #2. First he needed to know how important a figure in nullsec this highsec ice miner was. Lillith denied being a highsec miner; she was only holding the ice for a friend. It's a good thing her "incursion toon" trained Exhumers.

There were some holes in Lillith's story. Why didn't she know about me? Or for that matter, CODE., one of the most famous alliances in EVE history? Was she a bot-aspirant?

Enough of the Bushido nonsense. It was time for 412nv Yaken to tell Lillith how highsec really worked.

To be continued...
Posted by MinerBumping at 17:24