Goofus and Gallant in Aidart, Part 1

When people come to EVE Online, they tend to bring with them a bunch of misconceptions about the game. It's the New Order's job to correct them. We've been doing it for years. And it's paying off.

Hex Husky was a highsec miner. Despite being a relatively new player, he was well aware of the Code. Agent Zopiclone's work in the Verge Vendor region made such knowledge more freely available.

There it was: Indisputable proof that the Code is good for new players. Zopiclone was pleased to see the belts in Aidart almost empty of miners--but full of asteroids and promise.

One can get an accurate measure of the health of a highsec system by looking at how many times my name is praised in local per hour. You might call it the Saviour Appreciation Index. At that moment, Aidart was a very happy system.

Agents of the New Order provide all manner of services to the good people of highsec. Hex Husky's knowledge of the game continued to be augmented.

Hex took a break to write an EVEmail to me. In it, he offered his frank, honest assessment of the Code's impact on the game.

Hex didn't pull any punches. He concluded his EVEmail with a request to buy a mining permit directly from me. But as Hex was writing this EVEmail, the rest of highsec wasn't in suspended animation. Life went on:

As Hex was writing the EVEmail, Zopiclone had been dealing with another Aidart miner: Master OrionStarhunter. 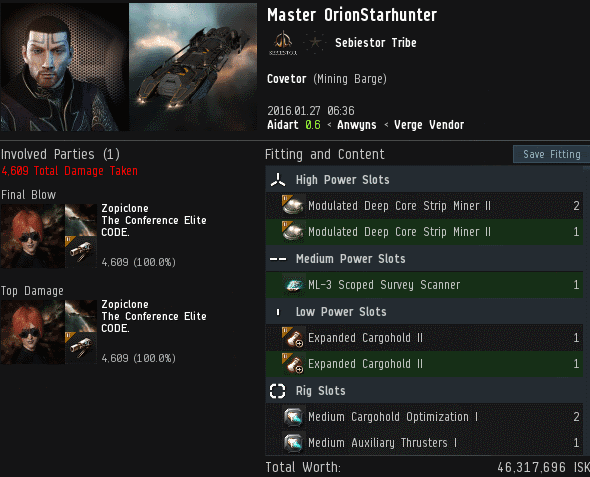 Zopiclone was revolted by Master's anti-tanked Covetor. She had no choice but to smash it into little pieces. Needless to say, Master OrionStarhunter didn't make a good first impression like Hex Husky did.

Master asked Zopiclone to enlighten him. A reasonable request, since Zopiclone was in that business. But when she enlightened the miner, he refused to listen. 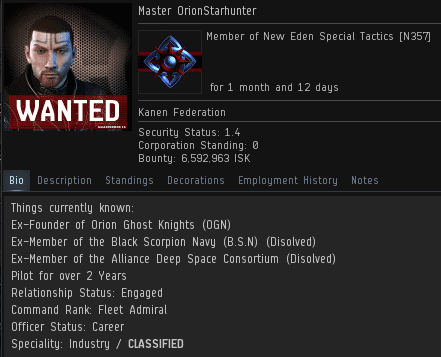 The story was coming together now. Master OrionStarhunter was a Goofus.

One system, two very different miners. What would their fates be?