Previously, on MinerBumping... Lillith Darkmoore and Agent 412nv Yaken were engaged in a high-stakes private convo. Hanging in the balance were Lillith's 4 billion isk reimbursement claim and the very fate of highsec itself. Lillith had near-total control of the most powerful fleets of the Providence region. She claimed to be acting in defense of her nullsec Bushido code. Was it true, or did she simply lack faith in the New Halaima Code of Conduct?

Lillith insisted that she had full faith. Still, she wanted her 4 billion isk back.

Without the ability to file an emergency appeal with the Saviour of Highsec, it was time to consider what would happen if reimbursement negotiations broke down.

What if the Provi big boys had to get involved? It was too terrible to think about. But 412nv Yaken was an Agent of the New Order. It was his job to consider worst-case scenarios.

There was good news: Agent loyalanon, leader of CODE. and the #1 PvP'er in EVE, had logged in. If the Saviour of Highsec isn't online, a convo with loyalanon is a pretty darn good back-up plan.

Despite his immense responsibilities, loyalanon put everything else aside and joined the emergency convo.

Unfortunately, there would be no TeamSpeak conference on that day. One was desperately needed, given that Lillith had 6,000 angry troops at her beck and call. 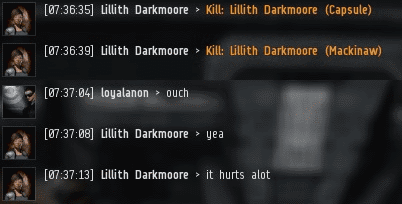 Lillith got loyalanon up to speed. The Agent took a moment to savor the delicious killmails, but not in such a way as to offend Lillith.

It still came down to Bushido. The gankers hadn't treated Lillith the way highsec pirates are supposed to, namely by giving her a warning and a chance to warp away.

The carebear let slip her true motives. She was only interested in isk. After all this, was Lillith just another bot-aspirant?

Providence's favorite highsec ice miner began to lose her patience. In the distance, a chilling sound: The beating of war drums.