A year ago, if you had asked the EVE community at large to identify the most universally reviled character in the galaxy, you would probably find Xenuria's name at the top of the list.

For those who are unfamiliar with Xenuria's checkered history, he first made a name for himself with his crusade against the Goons/CFC in general and The Mittani in particular. A gadfly of EVE fan events from year to year, he was accused by some of "ruining Fanfest". This sentiment was felt passionately enough by some Goons that, in a notorious incident, Xenuria's name was scratched off of the EVE monument in Iceland.

Nor were the Goons alone in feeling unenthusiastic about Xenuria's presence in EVE. A few years ago, Xenuria was disqualified from running for the CSM when CCP Dolan reportedly accused Xenuria of being affiliated with a group of hackers who DDoS'ed the EVE servers. Former head of security CCP Screegs (i.e., former Goon CEO Darius JOHNSON) also leveled some accusations against Xenuria. 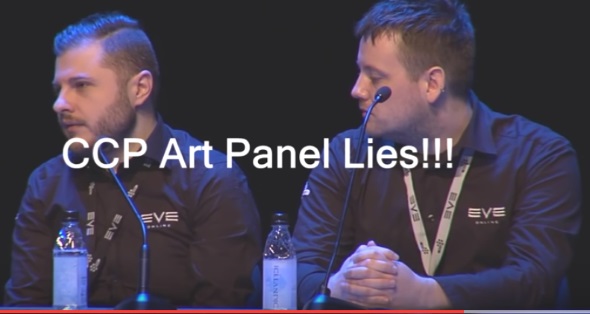 Nor did Xenuria endear himself to rank-and-file CCP employees when he accused the art team of lying during a Q&A session at Fanfest. The subject? Something about the graphical quality of characters' shoes.

This is not meant to be an exhaustive account of Xenuria's dealings with the EVE community. It would take too much time and effort to fully catalog the various feuds and accusations of wrongdoing associated with the controversial CSM candidate. As EveNews24 reported back in 2014, "Xenuria has been banned and shunned even by organizations that are notoriously lenient when it comes to player behaviour, like the GSF and TEST Alliance."

Year after year after year, Xenuria ran for CSM. Though he always appeared on the ballot (when CCP allowed it), he never came anywhere close to victory. He was a laughingstock, a perennial joke candidate. But then something interesting happened. In February 2015, during the CSM10 campaign, Xenuria managed to secure a high-profile endorsement for the first time. From the MinerBumping post:


"Xenuria is our other endorsement this year, though it comes with a number of caveats. First of all, Xenuria doesn't really belong on the CSM. This endorsement isn't meant to suggest Xenuria would make a good CSM member. He wouldn't. In fact, you should probably leave Xenuria off your ballot.

"All that having been said, a vote for Xenuria sends a word of caution to CCP. It reminds them that they shouldn't take the CSM for granted, and that whatever issues they may have in dealing with the CSM candidates who do get elected, things could be worse."

Xenuria went on to lose his campaign for CSM10, just as he'd lost all of the CSM races before. And yet, almost from the moment he received the MinerBumping endorsement, Xenuria's luck began to change--as if the Fates had given his life in EVE another roll of the dice. 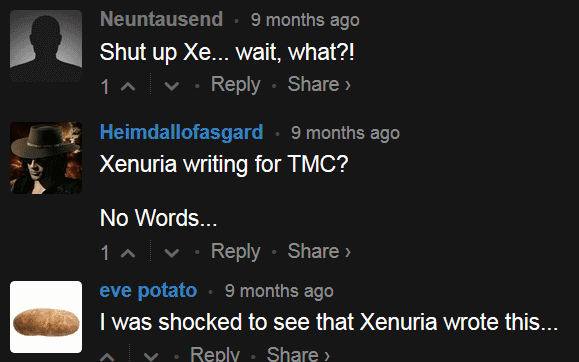 Behind the scenes, invisible gears began to turn. Curious things occurred. Was it the "MinerBumping bump"? What precisely was the mechanism by which this process worked, no one can say. Whatever it was, by June, Xenuria was publishing articles on TheMittani.com, to the amazement and confusion of onlookers everywhere.

Things only got weirder. In August, Xenuria was invited onto an episode of The Meta Show by his mortal enemy, The Mittani himself. Viewers were baffled. 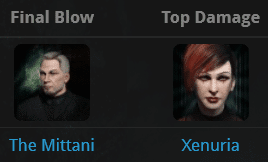 Inexplicably, Xenuria was allowed to join Goonswarm Federation itself, and in a widely-circulated killmail, EVE bore witness as, to the astonishment of everyone, Xenuria and The Mittani flew in the same fleets.

Meanwhile, CSM10 suffered as the institution of the CSM itself completely disintegrated. Tweets and lengthy articles were written on the subject. Which brings us to the CSM11 campaign.

The Imperium released its official ballot. In a move that would've been inconceivable a year ago and only marginally more comprehensible today, the mighty nullsec coalition put Xenuria in its third slot. The Imperium's press release explained the decision with faint echoes of the previous year's MinerBumping endorsement:


"Let's not sugar coat this. This is the year of the CONDI. Like the year of the dog except instead of eating our own shit we make CCP eat it. Our ballot is very specifically picked to not only support our allies but to give a nice big fuck you to CCP. They went after Sion. CSM Reps were replaced. They ignore blatant leaking from other CSM members. CCP is fucking up. When CCP fucks up it is up to us to hurt them because we love them.

"We remain hopeful that they can take steps to foster open communication again. That being said, we must prepare for the worst and communicate our feeling in an appropriate manner. Sending the most villainous of us (Aryth) along with one of the most hated people in EVE (Xenuria) should do the trick.

"Yes, there are meta within meta reasons for Xenuria. Just trust in us to have some complicated evil plan and a backup plan. There is pretty much no way this doesn't play in our favor in some way. Think of him as the Trump vote. Because fuck you that's why."

Incredibly, the Imperium endorsement all but ensures that Xenuria will be granted his fondest wish, a spot on the CSM. 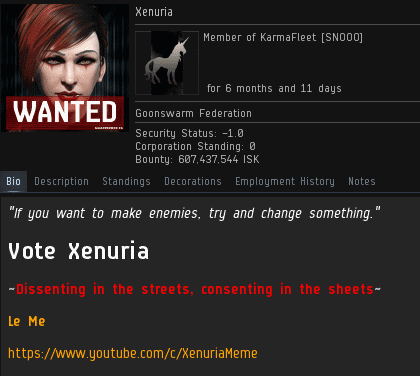 You can cast your CSM ballot today. Why vote for Xenuria? Because sometimes things just happen.
Posted by MinerBumping at 20:50