Previously, on MinerBumping... Lillith Darkmoore lost 4 billion isk after a stunning suicide gank. Lillith cried foul and threatened to get the "big boys from null" involved, prompting Agent 412nv Yaken to negotiate peace. But the question of whether reimbursement was appropriate all came down to whether the laws of nullsec Bushido applied in highsec.


412nv Yaken > if i may, get you to quickly read over the below
412nv Yaken > http://www.minerbumping.com/p/the-code.html
Lillith Darkmoore > one sec
412nv Yaken > take your time, I just want to see this worked out

Our Agent referred Lillith to the Code. He hoped that once she'd read it, she would abandon all of the nonsense about EVE she'd learned in nullsec.

The miner insisted that she'd been caught on one of the very, very rare occasions that she was engaged in highsec mining. She normally did PvP all day in nullsec. Honest!

Agents of the New Order had been able to gank Lillith only because she wasn't able to tap into her vast nullsec intelligence network. Highsec was like a black hole to her.

It was 412nv's job to show the miner that she was at fault for the gank. She'd taken highsec for granted. 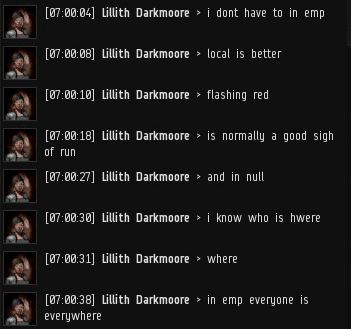 Lillith didn't need to use the directional scanner in highsec because "everyone is everywhere". She defended her tactics, but the loss of her ship and pod spoke volumes. 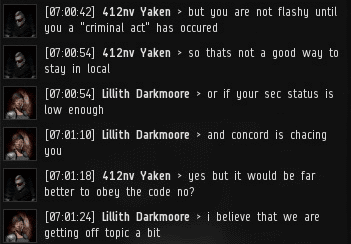 Just when 412nv seemed to be getting through to her, Lillith wanted to change the subject. She didn't want to hear more about the Code. She wanted her money back.

If only miners weren't so preoccupied with isk, they'd have a lot more spare time to improve their understanding of the Code. 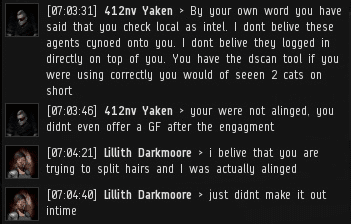 412nv urged Lillith once again to reconsider the usefulness of the D-scanner in highsec. She insisted she'd been fully prepared to escape, but failed somehow. She must've been "passive aligned". She'd also lost her pod, which has no align time. She claimed not to have been AFK. Maybe she was "passive ATK"? 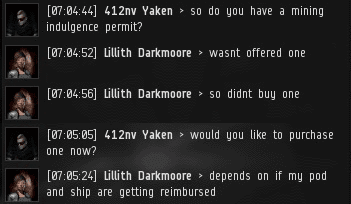 Lillith hinted that she might be one of those "I would've paid if asked" types. But when given a fresh opportunity, the 10 million isk she owed was not immediately forthcoming. 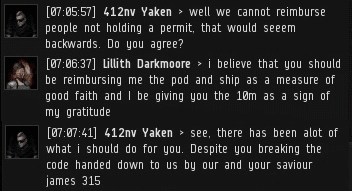 Unbeknownst to Lillith, 412nv had been quietly doing a threat assessment on Lillith's "null big boys" the entire time. Now our Agent had pinpointed their location: They were from Providence, the most treacherous region in nullsec!