Goofus and Gallant in Aidart, Part 2

Previously, on MinerBumping... Agent Zopiclone made two new friends in the Aidart system. Both were miners, but what a contrast! Hex Husky praised the name of James 315 and expressed sincere appreciation for the New Order. Master OrionStarhunter did neither of those things, and he lost his ship.

The miner was a poor sport. Despite having deadly combat drones, a state-of-the-art scanning system, and the ability to warp his vessel from place to place, he considered his departed ship to have been defenseless.

Master had some peculiar notions about PvP in EVE. If he'd been the victor, rather than the loser, maybe he would've felt differently.

Presented with yet another opportunity to buy a permit, Master flat-out refused. What was he up to?

According to the carebear, EVE isn't a PvP game about spaceships blowing stuff up; it was all just one big mining simulator. But if that were true, it would only increase the need for a mining license system, right?

Master was stunned to learn of yet another disadvantage of not owning a permit.

I've never understood this idea of not buying a permit unless CCP requires it. Should the renters in nullsec refuse to pay rent on that basis?

The illegal miner questioned our Agent's honour. All while aspiring to be as bot-like as possible! What a joke.

Agent Zopiclone realized that the miner misunderstood the pricing arrangement. Permits aren't 10 million per ship; they're 10 million per character per year. Maybe when Master was told of this, he'd reconsider.

No such luck. Master OrionStarhunter had been given the privilege of his own private convo with an Agent of the New Order, but he was totally ungrateful about it. Meanwhile, back in Aidart local...

Curiously, though the miner had been away from the game for five years, he'd absorbed the rumors about CODEdot being a secret front for Goons.

Hex Husky took notice of the conversation in local and offered his own point of view.

Hex spoke with him, miner to miner. You'd think the endorsement of a fellow miner would mean something, but Master couldn't even consider parting with any of his isk--unless it was taken from him by force. 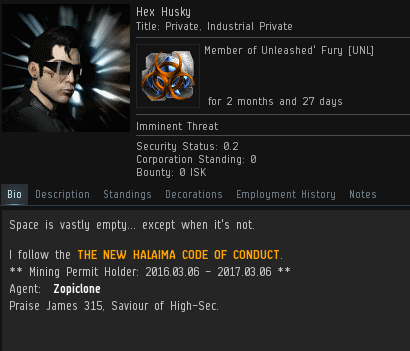 Every miner in highsec has a choice. They can be like Hex Husky and delight in the wonders of the Code. Or they can suffer and whine like Master OrionStarhunter. Any questions?
Posted by MinerBumping at 17:52