Remember the days when highsec asteroid belts and ice fields (not anomalies--they used to be static, infinite ice fields) were filled with Hulks? Clouds of greedy, untanked Hulks. A miner named Nabjorn Amatin was apparently nostalgic for those dark, barbaric times. 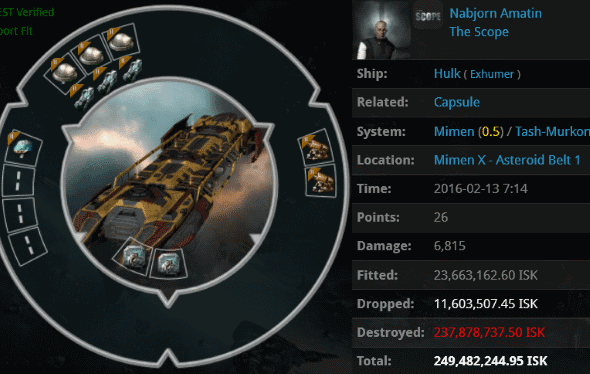 Agent Jack Van Impe to the rescue! Jack was on patrol in Tash-Murkon and discovered the Hulk mining in the Mimen system. Our Agent sent Nabjorn an unmistakable message: Highsec must make progress, and there's no going back. The obsolete Hulk was destroyed, along with a 9.3 million isk pod.

Jack sent Nabjorn instructions on how to obtain a mining permit and a more appropriate mining vessel. Jack's EVEmail was thorough, but Nabjorn still had some lingering questions.

Before Jack could answer, Nabjorn sent another EVEmail. I've noticed that non-compliant miners tend to be disorganized in all aspects of their lives. This often results in multiple EVEmails sent one after the other, as opposed to the miner collecting all of his thoughts in a single EVEmail.

And another one. This was one scatterbrained miner. Then again, when was the last time someone improved his mental state by mining in highsec all day? 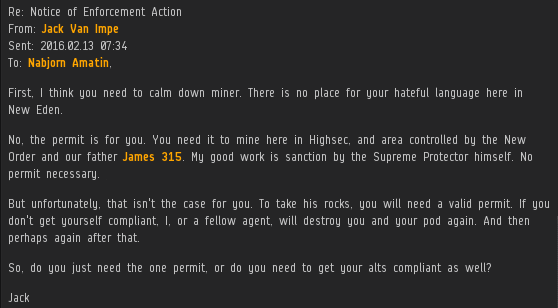 That 10 million isk must have been very important to him.

...and another follow-up, for good measure. There are times when one almost wishes the miners remained AFK. But if a miner isn't spewing filth at an Agent, he's probably spreading his poison somewhere else. The only permanent solution is to bring miners into compliance.

Fearing the necessity of using the Red Pen, Jack copied some of highsec's finest on his EVEmail. 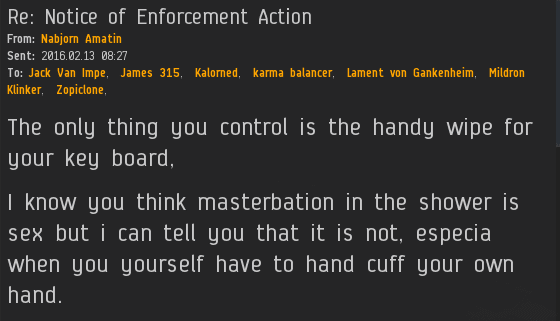 Nabjorn hit "reply all" and condemned himself before an audience of EVE legends. He couldn't get excited about buying a mining permit, no matter how desperately he needed one. Nabjorn was stuck in the past. Ironically, he'd never played EVE prior to the arrival of the New Order. Perhaps he simply lacked the instincts of a modern, civilized miner.
Posted by MinerBumping at 00:38