MalkePigen is a troubled soul. You may know that she has complained about CCP stacking the deck in favor of gankers. That's only the start of it.

You see, MalkePigen has been playing EVE since 2008. By this point, she could be anything: A supercap pilot, a nullsec coalition leader, a market tycoon... If she set her sights higher, she could even aspire to become an Agent of the New Order. Really.

Instead, MalkePigen has wasted her time in EVE. She gets on killmails like this one: 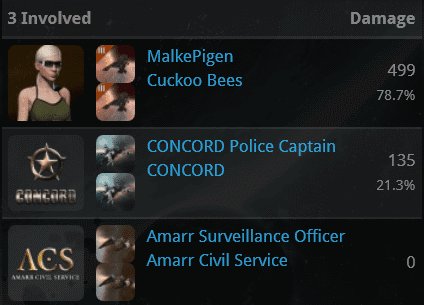 After spending 10 million isk to buy a kill right, MalkePigen attacked Agent Aaaarrgg's rookie ship, which had been undocked to draw CONCORD during an aggression timer. (Personally, I'd have recommended that she invested that money in a mining permit.)

Sadly, MalkePigen dedicated herself to the Anti-Ganker cause. As a result, she became deeply unhappy.

MalkePigen freely admitted in local that the CODE always wins. Always. So why was she bothering with her fruitless anti-Code agenda?

The Anti-Ganker bitterly cursed the state of the game mechanics. She couldn't see a way to win.

Of course, there was an easy way out of this dilemma. MalkePigen, like all the other rebels, could embrace the Code, join the New Order, and win every day. She wasn't willing to do it. Her misery was of her own making.

Video games are supposed to be fun. Agents of the New Order are always having fun; Anti-Gankers are always in a bad mood. And they accuse us of playing the game wrong!

MalkePigen was nostalgic for the days before the New Order started fixing highsec. Pretty weird.

Finally, the Anti-Ganker threatened to quit the game. Yet she continued to log in day after day, just to complain in local.

When our Agents saw her, they tried to be kind, warm, and welcoming--in keeping with the New Order's reputation. But MalkePigen was in no mood. She was about to unleash another epic rant. And this time, all of her secrets would be revealed.

To be continued...
Posted by MinerBumping at 21:47