Call in the Kevlary, Part 1

Highsec is a paradise-in-progress. We've got a lot of work to do, and no shortage of Agents willing to get it done. On a routine patrol of Lonetrek, Agent Spine Ripper saw someone making a mess, so she cleaned it up. 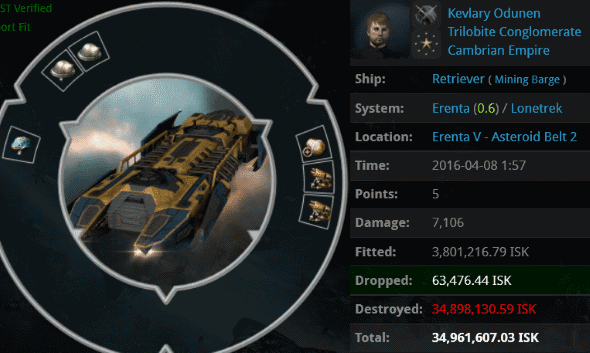 Kevlary Odunen's Retriever was worth about 35 million isk. It was untanked and poorly fit. Kevlary had no permit. He was also AFK. Hey, losses happen. No big deal, right? You live and learn.

Kevlary didn't see it that way. Agent Bing Bangboom forwarded a Code Info Guide to the miner. It looks like he didn't read it, or at least didn't get very far.

Kevlary's EVEmail continued. Between insults and threats of EULA violations, Kevlary peppered his rant with advice on how to play the game properly: Noctises. The future is in Noctises.

The EVEmail concluded, appropriately enough, with a cliché about fighting unarmed ships.

No weapons, you say? EVE expert Jeff Edwards once described combat drones as "angry metallic wasps with death-dealing stings." Try getting one of these through airport security.

Almost immediately after Agent Bing sent a reply, Kevlary fired back with another EVEmail.

Somewhere along the way, Kevlary's train of thought seems to have gotten off track.

Apparently the miner was preparing himself for a future of mining asteroids in real life. There's nothing wrong with using your imagination, but it's important to learn how to navigate the present reality. Right now, that means buying a permit and complying with the Code.

Kevlary didn't get it. He accused our hero of being a CCP dev using hacks to cheat. How else could he blow up an untanked Retriever in a 0.6? Bing decided things had gone far enough. It was time to supply some wisdom: 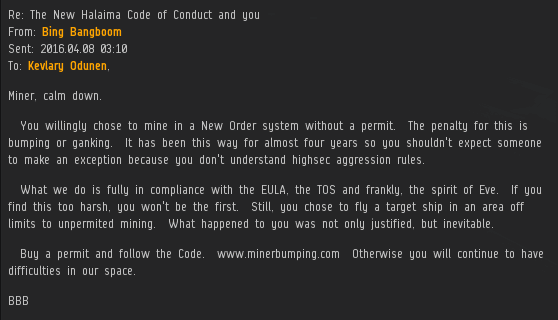 Our Agents seed highsec with sanity.

Yes, Kevlary was another one of those miners. Within seconds of receiving Bing's EVEmail, the miner denied being a miner. A minute later, as Bing was contemplating his reply...

Kevlary had Bing's full attention now. If he was going to save this miner, Bing might very well need to draw upon the full resources of the New Order.