The Making of a Legend: The loyalanon Story, Part 4

Previously, on MinerBumping... In Part 3, loyalanon stepped up to take leadership of CODE. after the sudden departure of xxBLACK SKULLxx 929. Ironically, both Agents had originally been anti-Code gankers whose minds were changed after they investigated the Code more thoroughly. loyalanon's ascension came not a moment too soon: During the period of nullsec peace following B-R5, CODE. was destined to become the most controversial and most talked-about alliance in EVE. loyalanon's story continues, in his own words.

We jumped on the test server and instead of actually preparing for the Alliance Tournament and doing doctrines, we would undock freighters and sit there and blow them up with different ships. We honed our ganking skills in the test server, working out how many Catalysts we needed for triple-bulkheaded freighters, how many Taloses we needed to gank jump freighters, etc., etc.

As far as I am aware, we had given CCP another reason to place CODE. under the microscope, and I believe this was the stepping stone to getting approval to ban multiple CODE.-affiliated pilots. I also believe that we had succeeded in my goal I outlined in part 1, and that was to become even more hated then we already were. When you have nothing to lose, why does it matter if more people hate you?

I had given a ton of carebears more reason to hate us than ever before. A lot of carebears said this was the end of CODE. A lot of people to this day, 2 years later, still talk about Alliance Tournament and CODE.'s no-show in it. These same carebears talking about how CODE. didn't show up, wouldn't be able to tell you the teams that participated or the winners without using Google. We were immortalised in the Alliance Tournament and will forever be associated with the Alliance Tournament. As far as I am concerned, we had succeeded in forever making the CODE. Alliance more well-known then we already were. Op Success. 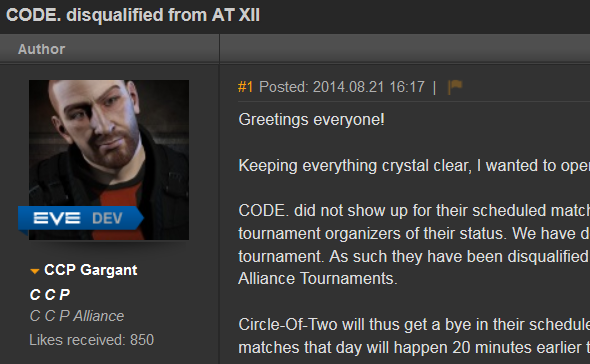 The Greatest Ganker in Eve.

The greatest ganker in Eve, in my eyes, is the legendary D400, who was banned wrongfully in the September Banwaves (which I will cover next).

Even to this day, besides myself and holdmybeer, he is still ranked 3rd in the CODE. alliance and he has been banned for 2 and a half years. 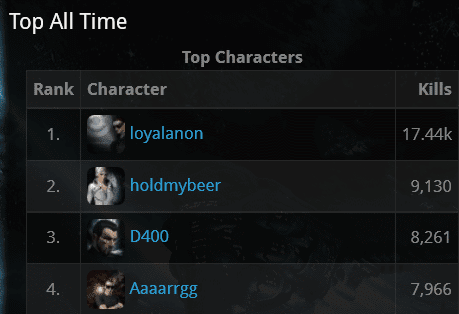 I have never met another player in all my time in Eve besides Zula Terra and PV Rock (both TCE members :)) who are as great a player as he is. If D400 was still active, his character would have surpassed me in kills and isk destroyed.

I salute to him as a player, a friend, and a brother. When he was banned, something inside of me changed in regards to Eve and would forever shape the course of myself as a player and the Alliance as a whole. 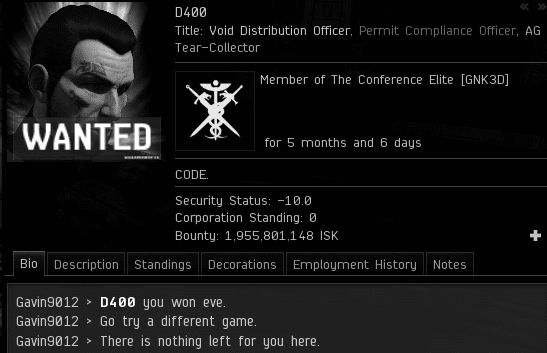 September the 9th (September 10th EVEtime -Ed) I was camping in lowsec (inb4 CODE. doesn't go to lowsec) with the aforementioned D400 when suddenly he logged out on all his characters due to what we thought was a socket close.

He tried to log back in and was surprised to see that he had been banned with no reason given. Within hours, CCP Falcon had linked this article regarding the real life harassment of other players.

To this day, there has been no event or "incident" identified that warranted the banhammer falling, however in my opinion due to our winning performance in the Alliance Tournament, CCP believed we had made a fool out of them, and something needed to be done in retribution. That retribution cost 50-100 player accounts of people who had done nothing wrong. Carebears will roll their eyes and point out "real life harassment" with most quoting what CCP Falcon had said above. However, they cannot link to any concrete examples of real life harassment that happened post the Sohkar Bonus Room incident.

I petitioned CCP on my friends' behalf but was told they would not discuss this any further. I tried again and even vouched that if D400 was involved in any form of real life harassment then I would be banned along with him. This was turned down as well, and any future petitions asking for further information was shut down almost immediately.

John E Normus, Capt Starfox, and myself discussed quitting over it and what we should do. There was confusion in the alliance ranks and everyone was terrified of getting banned. We drew conclusions and hypothesised about why people were banned, and if we were gonna get banned with no real answers forthcoming.

I mailed James 315 on the side and from the outcome of the response, I knew what I had to do. I had to burn highsec to the ground, and if you didn't know who we were yet, you would definitely know after I was done.