My Dog Ate My Permit

Some days it seems like every carebear has excuse for breaking the Code.

In fact, there's such a wide spectrum of excuses that you'd almost think it's really difficult to obey the Code.

Upon closer examination, the excuses don't hold up. Often, they don't even make sense. "I slept in because I have the flu." That might explain why you were late for work, but how does it result in an AFK Mackinaw? Do miners leave their barges parked in an asteroid belt all night and move them in the morning?

On occasion, a miner will attempt to leverage their real life health issue. Invariably, these health issues keep them away from their keyboards during a mining cycle or autopiloting session--but never prevent them from from writing insulting EVEmails.

Then there are the emergencies, which are always timed for the moment before our gankers arrive. Actually, our Agents are very accommodating when it comes to legitimate requests. In addition to docking up or exiting the game, a miner can request an Agent's permission leave their ship AFK and tend to an emergency. Upon hearing that someone's child was burned and in pain, what Agent wouldn't grant a miner permission to go AFK? If the Agent believed him, I mean? 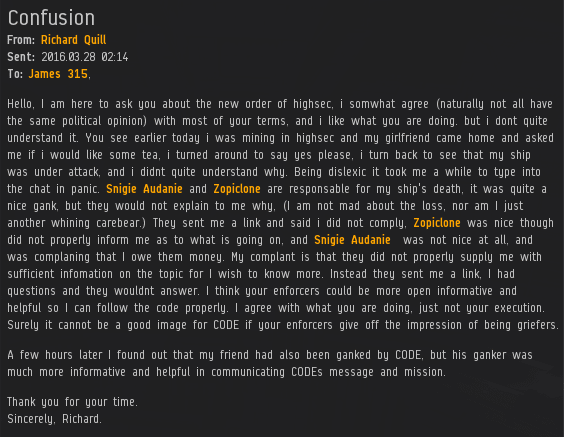 Sometimes the timing of the crisis defies belief. Richard Quill claimed that a pair of gankers landed on grid and ganked him just as he turned to his girlfriend and said, "Yes, please." Impressive. If it's true, then he should've docked up, said yes to his girlfriend, and then undocked to go mining again.

Netflix remains a serious temptation. Still, it's absurd. Would someone go to a movie theater and leave during the movie to go mining?

"Working on other stuff" is a polite euphemism for who knows what. Filthy miners.

Have you ever met a liar who can't stick to just one lie? Morpheus Atari was in the bathroom peeing while simultaneously helping his mother unload her car. Was her car parked in the bathroom? Was he peeing on her car? The EVEmail Morpheus sent to the other ganker may clarify matters:

That clears things up. The only remaining mystery is how Morpheus' mother's cancer is relevant to a conversation about his Code violation. 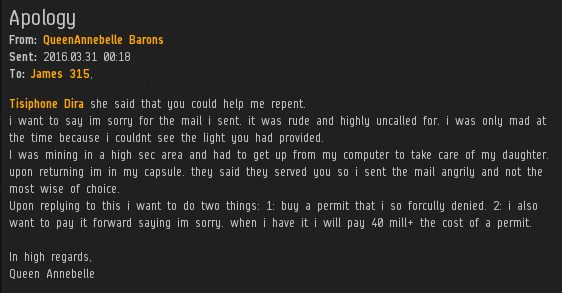 Make no mistake: Our Agents are the most reasonable, compassionate people you'll ever meet in EVE. It's not that we don't care about the reasons people violate the Code; we simply want an apology to go along with the explanation. Take QueenAnnebelle Barons, for instance. She told us her excuse for going AFK, but she also admitted it was her fault and made a plan to correct the problem.

As for the rest of the carebears out there, their own logic can be turned against them:

...enforcing the Code.
Posted by MinerBumping at 19:02