Is there room for good character and sportsmanship in a game about blowing up internet spaceships? How should someone conduct himself in EVE? These are important questions, yet the New Order is arguably the only organization in EVE that has put a lot of time and energy into answering them. Perhaps this is why our Agents have such a reputation for honour.


Spryt3 > pay 200m or we gank you
Altier Darkblood > Or I pay and you gank me anyway right?
Spryt3 > yeah we will just gank you if you wana go space lawyering

Agent Spryt3 bump-tackled an unlicensed Orca in the Uedama system. Unlike warp disruptors and scramblers and bubbles that you can activate with a simple mouse-click or keystroke, bump-tackling requires real skill and effort. Spryt3 requested reasonable compensation for his elite PvP, but Altier Darkblood didn't believe for a moment that he'd benefit from paying a ransom.

...Then, evidently, the moment passed; suddenly Altier was willing to pay. In the few seconds since "you gank me anyway right?", Altier had discovered our Agents had a decent reputation for honour. And you thought I was making that up!

After Altier transferred the 200 million isk, complications arose. The Orca pilot didn't have a mining permit--which is a prerequisite for ransoming privileges. The 200 million isk was reclassified as a "no strings attached" donation. 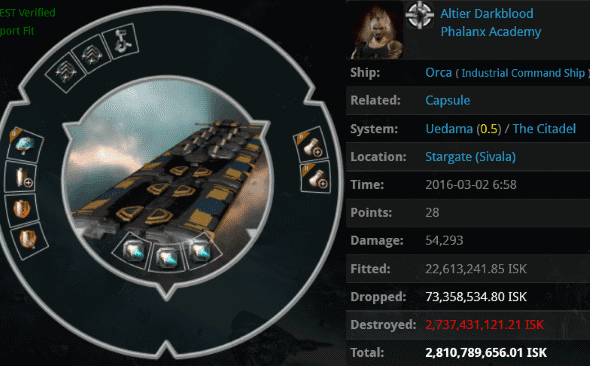 Spryt3 appreciated the money, but the Code is the Code. Altier's unlicensed quintuple-anti-tanked 2.8 billion isk Orca was destroyed by the gank fleet. However, a question remained: Was Altier unlicensed because he was a Goofus, or was it an honest mistake?


Altier Darkblood > I hope your children are retarded you fuck stick

The Code, as always, did an efficient job of revealing the true nature of the carebear.


Altier Darkblood > - If a miner does not wish to purchase a mining indulgence, he may still be granted a one-day reprieve, if he is able to correctly answer the Supreme Protector's Questions Three. You violate your own code you are without honor.
Spryt3 > You are ignoring all the other parts
Spryt3 > your donation to CODE. is appreciated
Altier Darkblood > You didn't even afford the offer to purchase a permit?

Suddenly Altier had an interest in reading the Code. Maybe his interest was sincere; maybe he really would've bought a permit if given more warning. Maybe first impressions were inaccurate, and the Orca pilot deserved another chance to prove he wasn't a Goofus.


Altier Darkblood > You're a cunt I hope you die in a car accident tomorrow and it's slow and you watch your family die before you, and just before you die I hope a homeless man rapes you.

The New Order's methods continue to be very reliable.


Altier Darkblood > I'm not even a miner, I was just moving cargo. You really are a fucked up cult aren't you?
Spryt3 > you still need mining permit
Spryt3 > James 315 our savior explained it

Despite everything, Spryt3 was perfectly happy to help the carebear.

Like so many other Code-violating industrialists, Altier found something about the Code to be difficult to process in his mind. He couldn't get it. He wanted another explanation for his fate that day. He wanted Spryt3 to comfort him by telling a lie.


Spryt3 > I can't let a mining ship get away if it has no mining permit
Spryt3 > James 315 would be disappointed with me
Altier Darkblood > James should be disappointed you cut into his profit margine by not letting me purchase a permit, I would have gotten 2 for the ship you let slip by

Our Agent couldn't lie. He was motivated by a desire to do right by the Code and be a worthy representative of the Saviour of Highsec. 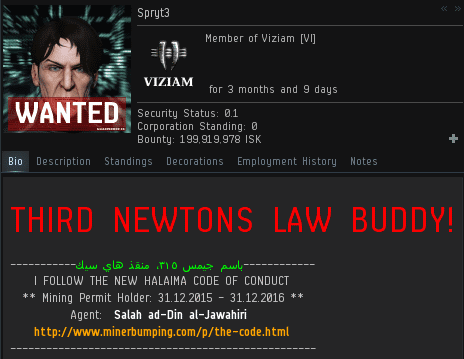 Spryt3 did his best to make the content-recipient happy, but Altier remained unsatisfied. It was time to refer the matter to Spryt3's CEO. Unfortunately, as a member of an NPC corp, he didn't technically have a CEO--except the CEO of his heart.