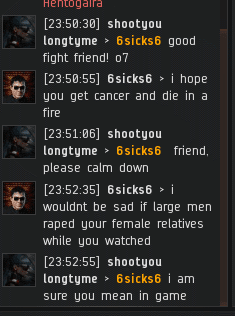 Ah, there's that highsec flavor we've all come to know. Welcome to the latest edition of the Highsec Miner Grab Bag!

Instead of opening his eyes to the truth, Shmirve chose to block our Agents' communications. This raises an interesting question. How does a miner carry on a conversation once he's blocked the only people willing to speak with him? 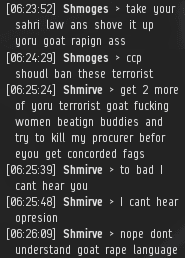 The answer: They broadcast their inner monologue into local.

Carebears have the most extraordinary views about what is and is not allowed in EVE. Fred Kyong was certain that the TOS contains an anti-bumping clause.

The next day, Fred was at it again, this time filing a petition against Agent loyalanon.

A side effect of the recent permaban: Each of the literally hundreds of players who petitioned loyalanon have cause to wonder if their petition actually was granted. The result, I fear, is more bump/gank related petitions for CCP to review. 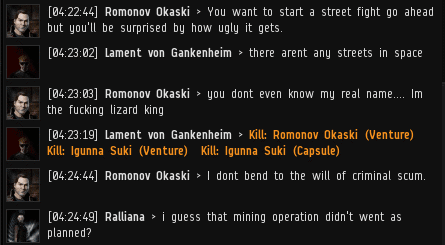 Contrary to the prevailing cynicism of the present age, war isn't always ugly. When the Code is enforced, it's glorious and beautiful. 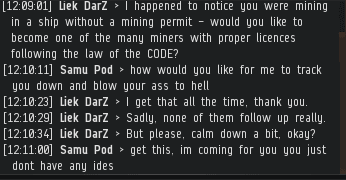 Agent Liek DarZ was pessimistic about the likelihood of Samu Pod actually following up on his threats. But he was wrong. Samu did follow up...

...Twice, in fact. But after penning those EVEmails, Samu's revenge campaign ran out of steam.

People often wonder what happens to all of the "formal complaints" that get sent my way. Are they taken seriously, or does the Saviour of Highsec merely ignore them? Let's find out. The first step is to review the EVEmail cookie791 Issier attached to her complaint about Agent NotTheSmartestCookie. 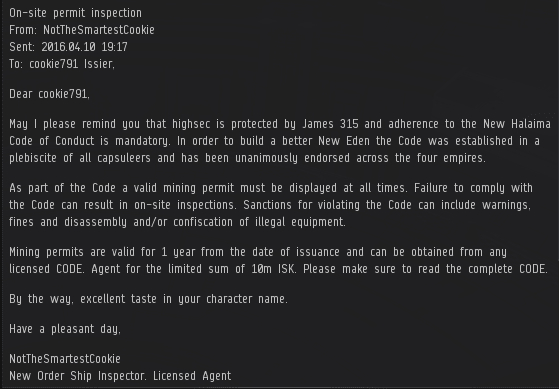 NotTheSmartestCookie's EVEmail was pretty typical of the notices sent to Code violators. According to the Anti-Ganking crowd, these EVEmails are inflammatory and provoke carebears into responding with profanity and ridiculous threats. Supposedly this kind of message justifies wishing death on people's family members.

Here's where the rubber meets the road, as they say. Would cookie791 get an answer from the Father of the New Order? Would justice be done?

There you have it. More proof that the system works.
Posted by MinerBumping at 19:30