The Making of a Legend: The loyalanon Story, Part 3

Previously, on MinerBumping... In Part 2, loyalanon became an Agent of the New Order. Empowered by the Code for the first time, he realized his dreams of suicide ganking Orcas and even freighters. But it is in the nature of the Code that those who embrace it are able to accomplish feats they couldn't even imagine before. loyalanon didn't know it yet, but he was about to take his EVE career to the next level.

A lot of the newer Code/New Order members, and a lot more people that want to get into ganking only see the cool killmails, the big killmails, the tears, and not much else. A lot of them don't understand why I go so hard on freighters, even empty freighters. A lot of people are shocked that I would gank an empty freighter. In my eyes, if you are flying a ship that is worth the same amount if not more than a PLEX carelessly, you deserve to lose it.

I knew that Miniluv/Goonswarm ganked freighters, but they only targeted freighters carrying X amount of isk (usually 5bil plus). I wanted CODE. to be something different. I wanted to kill everybody, regardless of cargo.

We set up shop in Isanamo and killed about 100+ freighters before moving to Aufay.

Around this time when we were ganking freighters in Isanamo, Death Dealers CEO Black Skull disappeared from the game, leaving the largest ganking corp in CODE.'s members unsure of what to do. 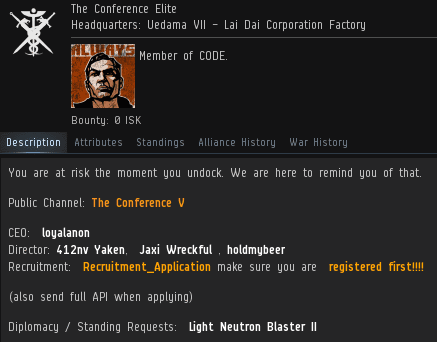 This core group of players helped shape CODE. Alliance into what it is today under my leadership, and for that I will be forever grateful.

To those of you who know a bit about highsec game mechanics, the lower the sec status, the longer the response time by Concord. Moving from Isanamo, a 0.6, to Aufay, a 0.5, made me appreciate those extra few seconds we had. About a month or two into ganking in Aufay, I had heard through the grapevine that Goons would like to gank with CODE. and vice-versa. They joined fleets and we proceeded to smash Aufay.

Aufay was chosen due to it only having 2 gates in system, and it connected the Hek/Rens area with Dodixie >> the rest of New Eden.

This was more of a strategic call as I didn't even know the trade routes - Niarja/Uedama. If I had known Uedama earlier I would have chosen Uedama, but we will get to Uedama later.

While ganking in Aufay, I had heard talk about CCP making changes to freighters by offering them rigs. This was later changed to lowslots. 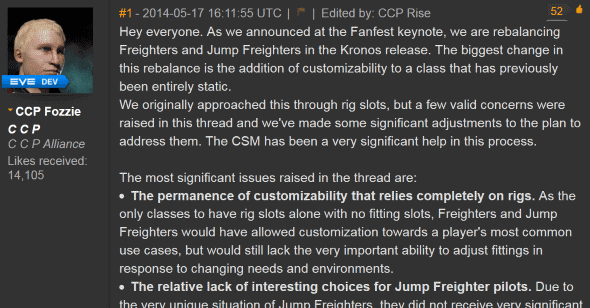 Carebears around New Eden celebrated (Anti-Ganking wasnt really a thing back then). We gave it one day and ganked the first freighters after the patch was released.

One thing about carebears and players who only care about isk, is that isk outweighs risk. They would rather pack their expanded freighter to the brim with billions and fly it through a ganking hotspot, than take the time to scout their route, make 2-3 trips, or jump an extra few jumps to skip wherever we are ganking.

Nearly instantly there was forum posts demanding more changes to ganking due to us ganking empty freighters. 197 pages with GM's/CCP and ISD's all responding.

We had attracted the attention of a lot of the Eve playerbase, and were no longer viewed as just miner killers, but a threat to the game itself in the eyes of the carebears. CODE. and its playstyle slowly started moving under the watchful eye of CCP and players across New Eden.

I had fulfilled my goal to be hated by everyone in Eve. The hate had exploded and I loved it.

While we were ganking freighters hard, the Executor of Code at the time, Khoda Khan, had returned to Eve and was in freighter fleets and loving it. He and his wife IRL, Aria Stane, were offering support wherever to keep these fleets going and loving it. CODE. had become one of the biggest ISK destroying alliances in Eve. We also had less members by far then the other alliances, killing hundreds of billions every month. We had not killed a trillion isk in a month yet but that was one of the priorities.

We were running a freighter fleet and someone said it would be funny if we were to join the Alliance Tournament coming up in a few months. After fleet, myself and Khoda talked about it and we applied to join. Originally we were not accepted, but after multiple petitions we were allowed to enter.

The EVE community had long assumed that CODE. would somehow disappear. Instead, its power only grew to alarming new heights. The backlash would be as furious as the freighter pilots loyalanon ganked. Would CODE. win the Alliance Tournament as expected, or would its victory take a more profound form than allowed by the official tournament rules?