The Making of a Legend: The loyalanon Story, Part 5

Previously, on MinerBumping... In Part 4, loyalanon described how the champions of the status quo in EVE reacted to the unprecedented threat posed by CODE. A shocking wave of permabans--which has never been adequately explained--threatened the alliance. CODE.'s leaders considered quitting the game in protest, but an encouraging EVEmail from the Saviour of Highsec gave loyalanon a different idea: Burn the carebears.

Results of the Banwave.

Carebears and Anti-Gankers celebrated far and wide that a lot of CODE. members were banned. I waited a few weeks and let them celebrate the 5 minutes of victory they felt over us.

One Month after the banwave, CODE. Alliance passed the 1 trillion isk mark destroyed in a single month. The carebear celebrations were cut short and the complaining and crying about us ganking continued.

This was the first time we had passed this milestone and it was only the beginning. Despite a combination of taking real life breaks and my time in lowsec between fleets, we have passed 1 trillion isk destroyed 11 out of the 19 months since the banwave.

My resolve to get back at those who I felt wronged our alliance and my friends had come to fruition, and we were farming tears/freighters at a rate never before seen in the history of Eve, with the help of Goonswarm/Miniluv.

One thing that CCP needs to learn is that you cannot patch stupid. The number one way to die in highsec in this game is to click the autopilot button.

I have lost count of how many freighters/industrials/Orcas have died with billions and billions in the cargo just due to using autopilot. The autopilot button is the ultimate form of carebearness/laziness in this game and if you use it and die to us, you definitely deserve to die. When I see Anti-Gankers trying to save someone who is on autopilot, I stop and think as to why they would want to save someone who is too lazy to save themselves.

Recently another freighter buff was introduced. I remember everyone in Alliance and MinerBumping chat were freaking out about the changes, saying how it will be harder, etc. All I knew was that I just needed more Catalysts to kill a freighter now, no big deal :) 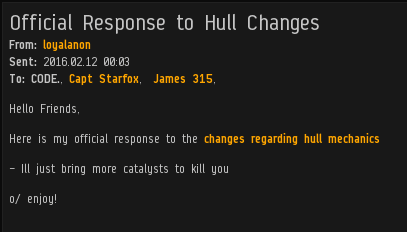 Let's not forget the carebears/Anti-Gankers celebrating that CCP had finally stopped ganking once and for all. Like I've said earlier, in the past we allow the carebears to celebrate their 5 minutes of victory they feel they have over us and then it's business as usual.

In closing, I imagine that the CODE. alliance will continue as normal. However, the game itself is changing and steering further and further away from the Cold/Harsh/"Free to play the sandbox your way" MMO that CCP has made it out to be. My fear is that no one will speak up for the pirate community in Eve, and carebears will have free rein to do whatever they want in Eve. CODE. Alliance in a way is a way to remind players that Eve is harsh, much to the carebears' disdain.

I started out ganking miners by myself, and learned everything by myself. There is no wrong way to learn how to do things in this game, and I have failed a gank due to error on my part more times than I can remember. If you want to learn how to bump freighters/miners, don't wait for someone to teach you - take a cruiser or a Machariel and sit in Uedama/Niarja/ice belts and bump people. The fastest way to learn in Eve is to go out and just do it.

A lot of aspiring Agents of the Code look up at my killboard or The Conference Elite's killboard and want to get to the top instantly. Unfortunately it does not work like that. You need to go out and forge your own path in Eve as a lot of others have done. You don't get to the top by watching other people put in the work. You get to the top by putting in the hard yards and knowing what you are doing is a worthy cause. A lot of other aspiring gankers are in it for the isk. You don't join CODE. for the isk, you join CODE. because you want to make a difference in highsec.

Final thoughts - If one person can change the face of Eve bumping miners in an icebelt in a Stabber, you can change New Eden as well. It's up to you to get up and do it, no one else is going to do it for you.

And so it was that loyalanon rose from obscurity and became an EVE legend. The Code enabled him to make history and change the face of EVE forever. loyalanon's final observations are worth pondering: Highsec is filled with ordinary players doing ordinary things. But all of them, having access to the Code, also have the potential to become legends.
Posted by MinerBumping at 17:15