Earlier this week, rumors began circulating about the permaban of zKillboard's #1 ranked EVE player, a pilot credited with over 10 trillion isk worth of kills. I can now confirm that these rumors are true. loyalanon and his longtime associate, 412nv Yaken, have been permanently banned from EVE. 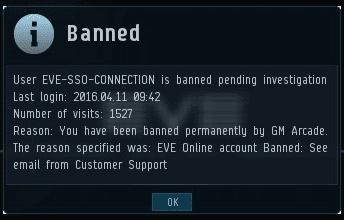 As has become CCP's custom, the ban pop-up does not include the reason for the ban. It refers to an email from customer support, but loyalanon says he's still waiting on that email. 412nv Yaken's ban is equally mysterious, with no explanation forthcoming as of yet. 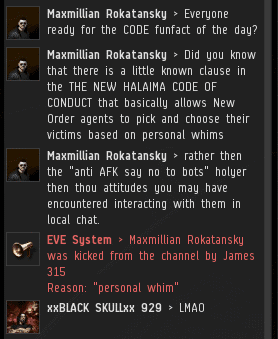 The timing of these bans is noteworthy. loyalanon announced his retirement in a multi-part EVEmail on April 3rd which contained a lengthy account of his storied history with the CODE. alliance. At loyalanon's request, I posted the entirety of his message in a series of MinerBumping posts earlier this month. The discovery of loyalanon's ban was delayed because he wasn't logging in as frequently. Like a cop movie in reverse, loyalanon was banned just days after his retirement.

As for 412nv Yaken, he had also recently retired from highsec ganking. 412nv left CODE. to join Snuff Box (primarily a lowsec corp) about a month before the bans occurred. loyalanon and 412nv Yaken were two of EVE's most prolific suicide gankers. Incredibly, due to the timing of the bans, CCP failed to prevent even a single highsec carebear from being ganked. It's as though each and every one of our Agents' ganks were meant to be. 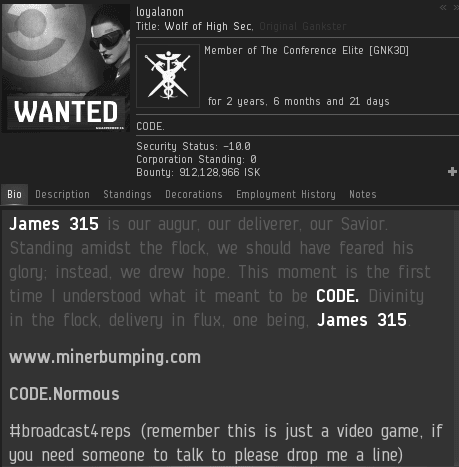 Normally, this would be the part where I extol the virtues and accomplishments of our newly martyred Agents. loyalanon kind of already did that job for me with his EVEmail, however. 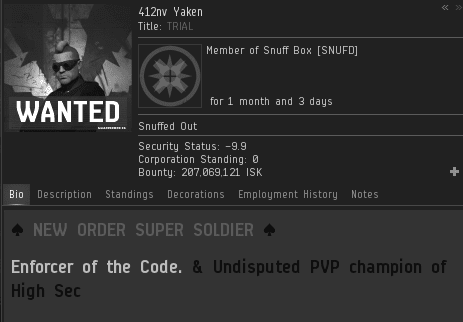 And let's not allow 412nv Yaken to become a footnote to the story of his own permaban. As loyalanon wrote, 412nv has a long record of achievements as an Agent of the New Order. He ganked over a trillion and a half isk of carebears and trained many other Agents in the art. Without him, highsec wouldn't shine as brightly today as it does.

...Which raises another important point. Not only did these permabans fail to prevent loyalanon and 412nv Yaken's ganks, they were unable to erase our Agents' legacies. The miners and haulers and bot-aspirants of highsec have no choice but to live with the lasting effects of our Agents' dazzling careers.

And each day, the elite army that loyalanon and 412nv Yaken helped to build continues to grow in strength and numbers.

Because, as they taught us, the CODE always wins.

Always.
Posted by MinerBumping at 20:26