Previously, on MinerBumping... Agent Spryt3 and friends destroyed an unlicensed Orca. The pilot, Altier Darkblood, refused to purchase a mining permit. Instead, he accused Spryt3 of having no honour. Confident that his Code enforcement action had been conducted according to protocol, Spryt3 brought in Agent loyalanon to adjudicate the matter. 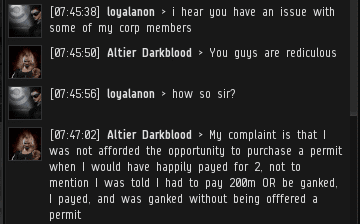 Altier claimed his issue was that our Agents weren't following the Code. However, loyalanon suspected that Altier's real problem was bitterness over losing a round of PvP.

As an honourable Orca pilot, Altier cared about honour. He wanted the New Order to admit that it was lacking in honour. Our Agents could've indulged him--but the New Order doesn't lie. 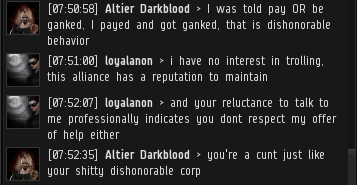 At the first sign of resistance to being paid reimbursement, Altier accused our Agents of being dishonourable. 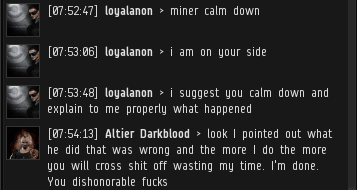 The Orca pilot began to say things that couldn't easily be taken back. loyalanon tried to pump the brakes.

Under the circumstances, loyalanon considered Altier's reimbursement request to be formally withdrawn. Spryt3 emerged from the controversy with his perfect record fully intact.

The rebels and Anti-Gankers would never admit this, but our Agents are known for being healthy in mind, body, and soul. Whether this is the result or the cause of obeying the Code, I leave for the philosophers to debate. 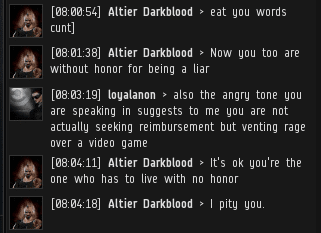 Altier Darkblood continued to follow what was, in his own mind, a code of honour. You see? This is why we require miners to follow our Code instead of letting them make up their own. You'd get a lot of really low-quality codes otherwise. 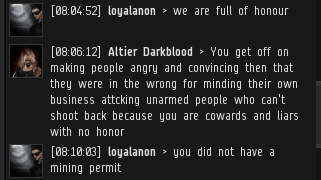 The carebear persisted. Was he really an honourable Orca pilot? It's a lot easier to buy a 10 million isk permit than to have honour, and he wasn't even willing to do that. 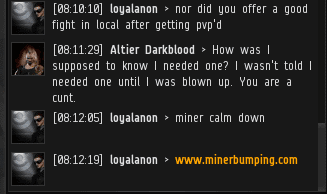 loyalanon gave the miner some good advice. Our Agent doubted he'd take it, but at least the effort had been made. 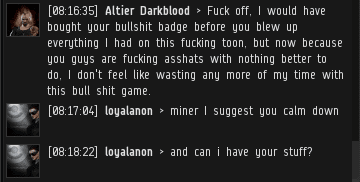 Altier Darkblood threatened to quit EVE. loyalanon once again told him to calm down--possibly saving CCP a subscriber in the process. Does that count as a player retention service?

After the convo, CODE. formally declared war against the miner's corporation; there was just too great a risk that there was another Altier among them. Altier quickly put two and two together and realized that his conduct was the cause of the wardec. 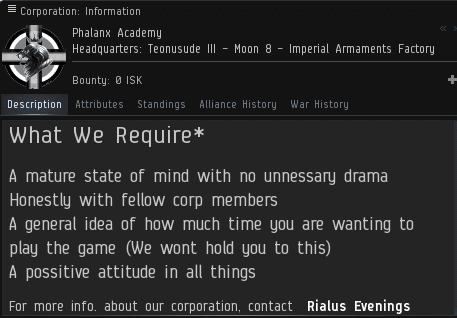 Honour is important in EVE, but honour is a matter of perspective. To a miner who rejects the Code, everything is upside down. Believe it or not, there are carebears out there who see CODE. as a force for dishonour instead of honour. Yet their point of view is easily debunked: If the Code is so bad, why do they get upset when our Agents "don't follow their own Code"?
Posted by MinerBumping at 17:41