As we've seen in the past, highsec mining corporations are problematic. Too often, their "experienced leaders" exploit the members (often new players), profiting off of them while subjecting them to the dullest and most unrewarding gameplay in EVE. Worse yet, they don't even obey the Code. 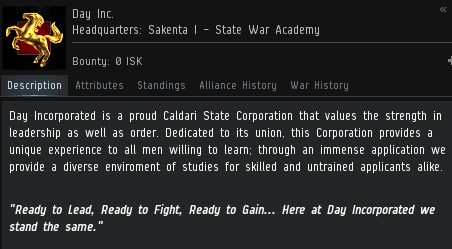 Day Inc. is a typical case. It boasts a few dozen members, putting it in the class of mining corps too large to be closed and reopened upon receiving a wardec. Carebear corps can be much larger though; some even form carebear alliances. How do worthless corps grow to such a size? 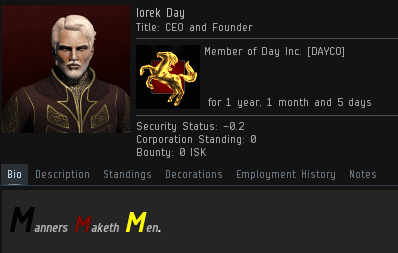 It begins with men like Iorek Day, the CEO and founder of Day Inc. He felt his leadership was too great to be limited to such a small corp. So he decided to find other highsec mining corps and acquire them.


Iorek Day > o/
Levivity > o/, heard you were interested in buying the corp
Levivity > May I inquire the reason why?
Revan Ikkala > i have a very good dipol warning u xD

Iorek approached the ARC Corporation. Its own CEO, Revan Ikkala, enlisted the aid of his trusted diplomat, Levivity, to handle the negotiations.


Iorek Day > Well I wish to grow my company and have serious passion for the industry. Miners are hard to come by and believe that in a collaborative effort we could accomplish much
Iorek Day > as it appears your leader and I share some ambition

Iorek shared his vision for his corp. Interestingly, he made no mention of the Code and didn't spare a few seconds to drop a "praise James 315" or anything of that nature. Which makes one wonder about his priorities, no?


Levivity > So you dont just want to aquire the corp+name, but you want assets aswell as members?
Iorek Day > with all due respect I consider your membes the assets
Iorek Day > and their loyalty at thtat

The ambitious CEO didn't disguise his intentions. He viewed highsec miners as a valuable resource. And he wanted more of them under his control.


Levivity > Aha, that makes more sense. What are you offering that would make this worth it for both us and the line members?
Iorek Day > what I offer my men on the regular
Levivity > What do you offer your members that our corp currently does not?
Iorek Day > that consists of payment, as I run my corp like an actual company.

Iorek boasted that he ran Day Inc. like a real business--something which hasn't always worked well in the past.

The banality of evil exposed: Iorek, in a chillingly casual manner, explained that he forced his miners to mine a certain amount each week. Everything they mined went to the corp, i.e. Iorek Day. If they mined enough, they'd be allowed to get some isk in return for their work. So much for the New Player Experience!


Iorek Day > I have a member who really kicks ass mining. makes 800 mil a week
Revan Ikkala > thats one hard worker i have to say
Iorek Day > Revan Ikkala I agree. I would argue to say he has no life
Iorek Day > but will not tell him that

In case anyone asks, this, in a nutshell, is why highsec needs the Code.


Levivity > Where are you based?
Iorek Day > I am based in several locations
Iorek Day > highh and low sec
Iorek Day > all miners go to one system, PvPers another, and Industrialists, another also
Iorek Day > order is key

According to Iorek, his corp did more than force people to mine in highsec in exchange for a slice of their own profits. They also did PvP. Everyone was segregated, of course, because you wouldn't want your miners in the same system as the PvP'ers who might otherwise defend them.

Day Inc. is no slouch in the PvP department, either:

Its isk efficiency clocks in at two percent.

As their fleet commander, Iorek leads from the front. He has contributed 66 ships to the cause. Although his zero percent efficiency is slightly lower than the corp average, it's probably because he's busy calling targets, managing scouts, etc. Besides, enemy fleets probably snipe Iorek first, to take the gifted FC off the field.

Clearly, Day Inc. was in a position to expand its operations and bring more EVE players under Iorek's command. But could he persuade the ARC Corporation's CEO and diplomat of the benefits?