The Making of a Legend: The loyalanon Story, Part 1

Millions of people have played EVE. Few of them are remembered by anyone for anything, and even fewer are destined to be enshrined in the history of gaming after the EVE servers shut down. Those whose deeds earn them immortality are EVE legends.

If one were to name the most well-known, influential players in EVE history, Agent loyalanon--the game's #1 ranked PvP'er of all time--would surely be among those at the top of the list. Much to the chagrin of the nullsec power brokers who wait for years (longer than a decade, for some) to claim positions of influence through sheer seniority, Agents of the New Order seem to come out of nowhere and earn their glory with enviable skill and charisma.

Of course, no Agent comes from nowhere. Each has a story. Today, loyalanon shares with us his own story. In commemoration of his retirement as day-to-day fleet commander, loyalanon has penned a detailed history of his EVE career. For the first time, we will delve into the secret origins of EVE's quantifiably greatest PvP'er. The non-italicized portions of this series are loyalanon's story in his own words. Enjoy. 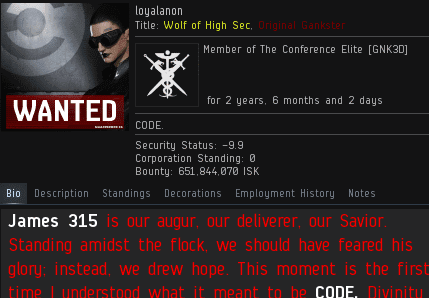 I would like to describe my time in CODE. including the ups and downs, a history of how I got to where I am so that I leave behind my story, which I hope you will publish in its entirety with links/screenshots on the MinerBumping site. I'd also like to describe the CODE. members and events that have had the most impact on me during my time in this glorious Alliance.

Let me start from the beginning -

I have been a member of the CODE. Alliance since January 2014 and have been ganking since 2012. Over this time I have seen friends come and go, nerfs to our playstyle, the hate from the carebear population, and most importantly, watched and nurtured this alliance in becoming a major powerhouse and the most feared alliance in all of highsec.

Like most EVE players starting out in this game I did what most players do: I was into mining in a Retriever (pre-buff changes) making useless t1 things that I thought would be important, using buy orders as I didn't know what a sell order was, etc., etc. I grew tired of this and started can-baiting noobs. After my first warning from a GM, I left highsec and joined Caldari Militia.

One day while looking at the corp killboard, I noticed that the rest of the corp were were killing miners in high sec, and I was curious as to how it was done considering the entire corp was basically -10 security status.

They took me out and showed me how to gank miners with thrashers. The rest is basically history but you don't get off reading only one paragraph :p

When I first started ganking miners, I didn't do it for ISK and have never viewed it as a way to make ISK. I did it for fun/tears and KB stats. Coming from faction warfare where you get a few frigate kills here and there, killing a battleship was a big deal. Back then, battleships were about 100mil each, and you are killing exhumers worth 100-200mil in one hit every 15 minutes - this was something incredible. Myself and 412nv Yaken would gank an exhumer, salvage the intact armor plates (which were about 20mil each at the time), and would use those intact armor plates to buy another 2-3 catalysts and repeat.

I proceeded to kill Mackinaws/Hulks and Skiffs non-stop almost daily, until I noticed I was at the top of the Goon Hulkageddon list (a now-dead link, or otherwise I would link the stats).

My First interaction with the New Order of Highsec.

I didnt know what Code or James 315 was until one day I was about to gank a Mackinaw, and one minute before I was about to gank, two New Order Death Dealer pilots came in and ganked him. Honestly I was amused as to other people ganking, as I hadn't really seen anyone else. I checked out the killboards and found they were ganking Orcas with like 12 people. As I was mainly solo besides the few I had in corp, this is something I wanted to do.

Visiting the forums one day I saw something about the New Order and CODE. and proceeded to haze and mock them due to not understanding what the Code/James 315 was.

Shocking, but true. Originally, loyalanon saw no use for a Code. He felt was doing just fine on his own. His hero's journey was certainly an unlikely one. How did an unknown, Code-less ganker become a legend?

To be continued...
Posted by MinerBumping at 17:17