CODE. Is the Most Relevant Alliance in EVE

You know, we live in a cynical age. Much of the EVE playerbase is disillusioned. They no longer believe in the things they once valued. In years past, EVE players took great pride in green killboards and high kill-to-death ratios. They believed these were the marks of a truly elite alliance. But then came the Goons, who mocked killboard stats as a measure of worthiness. Eventually, players even came to realize that everyone's killboards are green because all kill assists count as kills.

Then came the time when players looked upon the grand sovereignty maps with wonder and admiration. Surely it must be this, having power over large swaths of space, that gave one the true measure of greatness. Who could deny the bold colors of empires painted in broad strokes across nullsec?

Alas, it was not to last. With the rise of coalitions and the renter economy, space had to be meted out to meatshields and pets and renters. Alliances such as Pandemic Legion spurned the holding of sovereignty directly. After the introduction of FozzieSov, some even questioned--to CCP Fozzie's horror--whether sovereignty was worthwhile at all.

And so it was that a new measure of worth took hold in EVE: That of relevance. In a time when worth and power and elite PvP skill could not be quantified, relevance allowed players to judge one another by an unquantifiable, purely subjective standard. Everyone determines for himself whether a leader, corporation, alliance, or coalition is relevant or not. No longer is it necessary to kill a player's ships or drive his alliance from its systems. One need only declare one's enemy "not relevant", and moral victory is assured.

Is CODE. relevant? Those who oppose the New Order would say it is certainly not. Highsec doesn't count. The Code isn't real. Echoes of the old Miner Bingo quote, "Bumping? That won't do anything."

Last week, in the aftermath of the permaban of Agent loyalanon, CODE. changed executor corps. An alliance's executor corp needs a majority of the votes of its member corps. It's a silly mechanic with a sillier solution: The executor packs the alliance with a bunch of alt corps under its control. When the executor changes, new alt corps shuffle in, and the old ones shuffle out. At the same time as this was happening, The Conference Elite, CODE.'s second-largest corp, had to change its CEO. But this was impossible, because loyalanon was the CEO, and he couldn't log in.

Agent Mildron Klinker was to be loyalanon's replacement at the head of TCE. Allegedly, when a corp's CEO is permabanned, the player with the strongest claim will be given control by CCP. As loyalanon's eldest living trueborn son, Mildron had the strongest claim. Yet CCP refused to act. A new CEO can be voted in by a corp's shareholders, but 412nv Yaken, a TCE shareholder, had also been permabanned.

Thus, TCE sat out of CODE. while Mildron sought out other shareholders. One was located, but he wasn't able to play EVE for several days. The corp waited until his return to EVE, which was followed by the transfer of shares, a 24-hour shareholder vote for new CEO, followed by a final transfer of CEO power at downtime, and then the application to return to CODE., which became effective after another 24-hour period.

Pictured above, the CODE. member dotlan graph, reflecting corps' departure and re-entry into the alliance. EVE's cumbersome corp mechanics are not the most riveting subject in the world, I know. It's dry stuff. The absence of a 150-member corp from CODE., lasting for just over a week, is not exactly high drama. Unless one were absolutely fascinated by CODE., such dull, bureaucratic movements would not be considered very--what's the word?--relevant.

Within hours of the corp reshuffling, Reddit exploded. A post about CODE.'s member corps leaving rocketed to the top of the front page of the EVE subreddit, drawing an impressive 96% upvotes. It was big news.

Conversation about CODE.'s apparent collapse--represented by the loss of a 150-member corp--filtered into all of the other conversations. In a post about Fanfest badges, news of an alliance's collapse were presumed to be about CODE.

Then there were the rumors. Cap Stable podcaster Kuda Timberline seized on the chattering about Imperium losses in the north somehow affecting CODE.'s ability to shoot miners in highsec.

In a post about the latest nerf to freighter ganking, an alternative theory of CODE.'s demise was explored.

Followed by the merging of the theories.

An additional post on the subject was made, with 91% upvotes, helping to catch up anyone who had somehow missed the news.

Of course, the eulogizing followed.

Here, an Anti-Ganker expresses mixed emotions upon hearing the big news. But, ironically, it was among the Anti-Gankers that the optimism was the most cautious:

...For they have been burned by such rumors before. 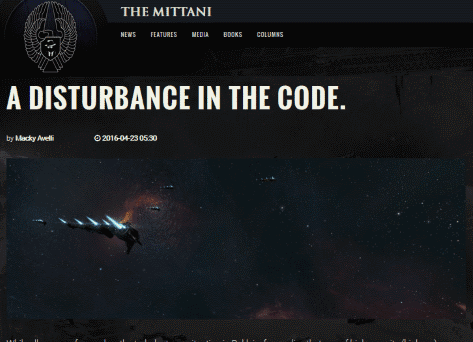 Of course, no earth-shaking event would be complete without coverage from one of EVE's major news sites. Did the week-long absence of a 150-member corp from CODE. really warrant all of this attention, though? It must've been a slow news week. Nothing else going on in EVE. 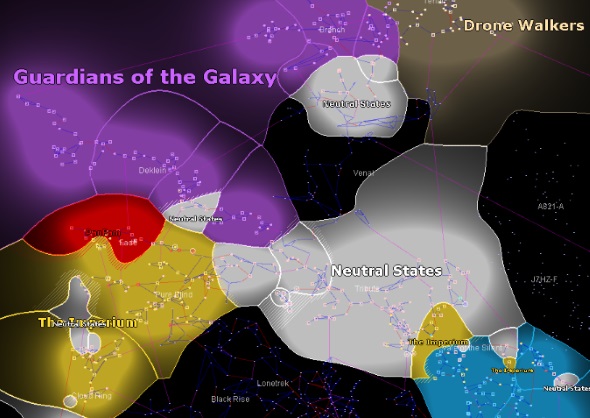 Nothing, that is, aside from one of the biggest wars in EVE's history--easily the most significant war in half a decade. While TCE temporarily stepped out of CODE., Goonswarm Federation lost sovereignty in the Deklein region. Goon ownership of Deklein represented possibly the longest-running consecutive period of control anywhere in nullsec, as even CVA's sovereignty in Providence had been interrupted at times. CODE.'s corp reshuffle got more coverage in EVE media than the Deklein blitzkrieg. True, TheMittani.com is pro-Imperium and had less incentive to discuss nullsec events. But even the anti-Imperium site EveNews24.com barely covered the war in more detail.

The fact is, no other alliance in EVE could generate so much conversation by the temporary dropping of a 150-member corp. Not Goonswarm, not Pandemic Legion, nobody. They'll deny it, swear up and down that it isn't the case, but their actions say otherwise: Maybe CODE. is somewhat relevant.

This is real talk, so I'll come right out and say it. I am the second-most well-known EVE player today. That might sound like a bold claim--even an outrageous one. Then again, consider the EVE playerbase. Most EVE players live in highsec and never leave. The majority of players don't follow the official forums, or read the news sites, or browse the EVE subreddit. By the first time they come across names like Sion Kumitomo or Grath Telkin or Elo Knight, or older ones like Chribba or SirMolle, they've been spending weeks, months, or even years hearing "Praise James!" Highsec players get virtually no content from anyone other than CODE. and the New Order. That's how the majority of EVE players experience the game.

Then there's the minority, those who venture out into nullsec. A minority of EVE players do read about the game and engage in the community outside of the EVE client; they read news sites and forums and Reddit. Those people? They dropped everything to watch, with rapt attention, as a 150-member corp left CODE. for a week.

You do the math. It's easy. CODE. is the most relevant alliance in EVE.

You know the reason why. It's because the CODE always wins. Always.
Posted by MinerBumping at 18:26