In a major intelligence coup for the New Order, Agent Aaaarrgg managed to slip an alt past the Anti-Ganking channel security personnel. Now to find out what those scheming carebears were up to... 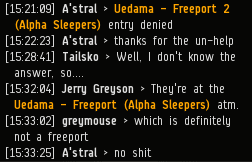 As Aaaarrgg's spy joined the Anti-Ganking channel, a fight was already in progress. Not between rebels and Agents, of course; the rebels were busy quarreling with each other.

Rebel forces were attempting to gain access to a Citadel which they suspected of rendering aid to CODE. Upon failing to do so, the Anti-Gankers dispersed.

Having over-exerted themselves, the exhausted Anti-Gankers retired to their channel for some well-deserved rest and relaxation.

The channel returned to its default setting: Reports of a bunch of CODE. sightings, but no one actually doing anything about them.

Despite year after year of endless nerfs to ganking, the Anti-Gankers found themselves unable to prevent ganks. But they've become used to it.

An idealistic young newcomer, A'stral, wanted to be proactive. Lacking experience, she hadn't yet grown cynical about the possibility of stopping the New Order. She was getting there, though. 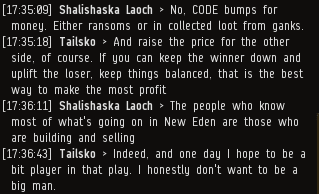 Conversations lazily drifted through the Anti-Ganking channel. They all centered around one thing: CODE.

I've written more words about my ideas an intentions for EVE than anyone else. Yet in so many ways I remain a mystery to the rebels. What am I really after?

The Anti-Ganking "community" owes its existence to us. Even so, they'd prefer that we--and they--didn't exist.

The New Order's Agents are constantly innovating. By contrast, the Anti-Gankers haven't changed much over the years. They still cling to the idea that shooting spaceships in a spaceship-shooting game is "harassment". If PvP is harassment, then the New Order engages in elite harassment.

Nor have the Anti-Gankers ever been grateful for all of the ganking nerfs. Shalishaska Laoch wouldn't be happy unless invincible CONCORD ships killed gankers before they ganked. 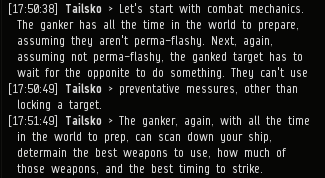 Tailsko abandoned the idea of defending against ganks long ago. She doesn't believe evading gankers and tanking one's ship constitute "preventative measures". Most miners think like this. They're like a pilot who jumps into a nullsec bubble gatecamp of 100 people and complains there's no counter.

A'stral tried to look on the bright side, but Tailsko was having none of it. Calculating the most efficient way to AFK mine was enough content for her, thank you very much. 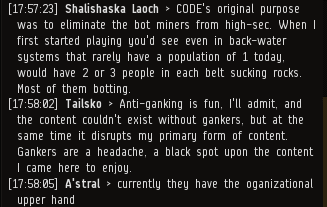 The gloomy mood of the channel persisted. Failing continuously nonstop daily must be so depressing. 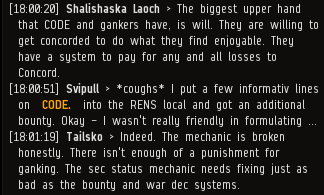 Tailsko suggested that the way to fight back against CODE. was to hope that CCP granted One More Nerf™ to highsec ganking. Was there anyone in the channel who could talk some sense into her?